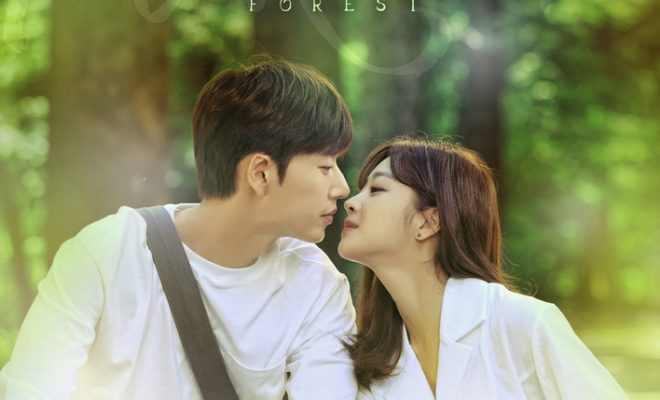 Set in an obscure yet tranquil place, Forest bends into an appeasing atmosphere while narrating the surreptitious mystery behind the tall timbers in the woods. 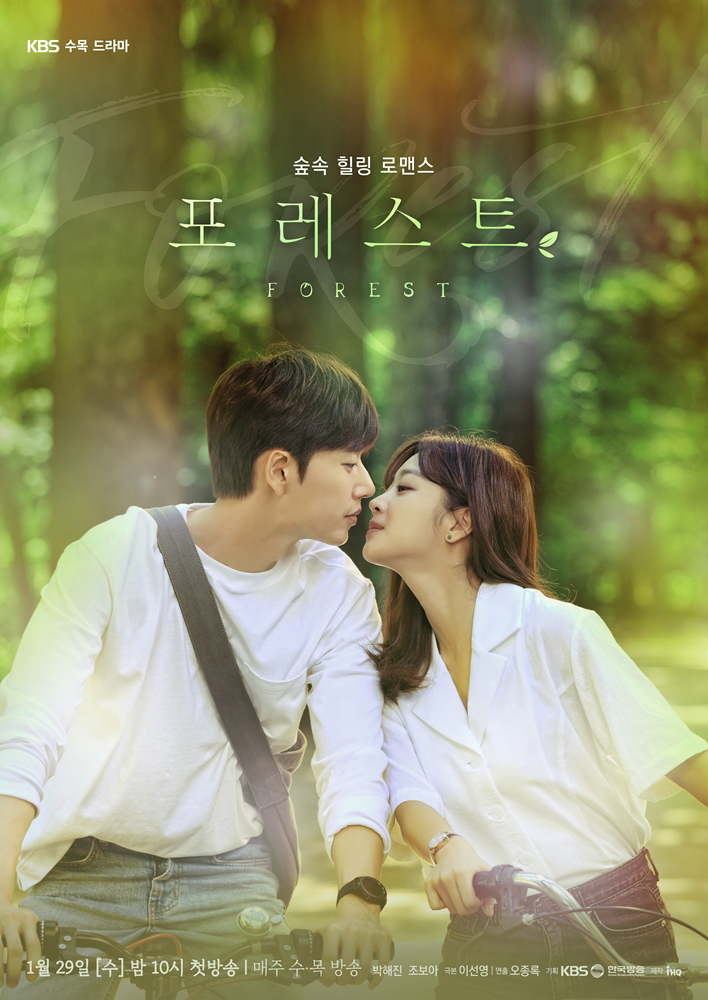 Related Dramas: Chocolate, When The Weather is Fine 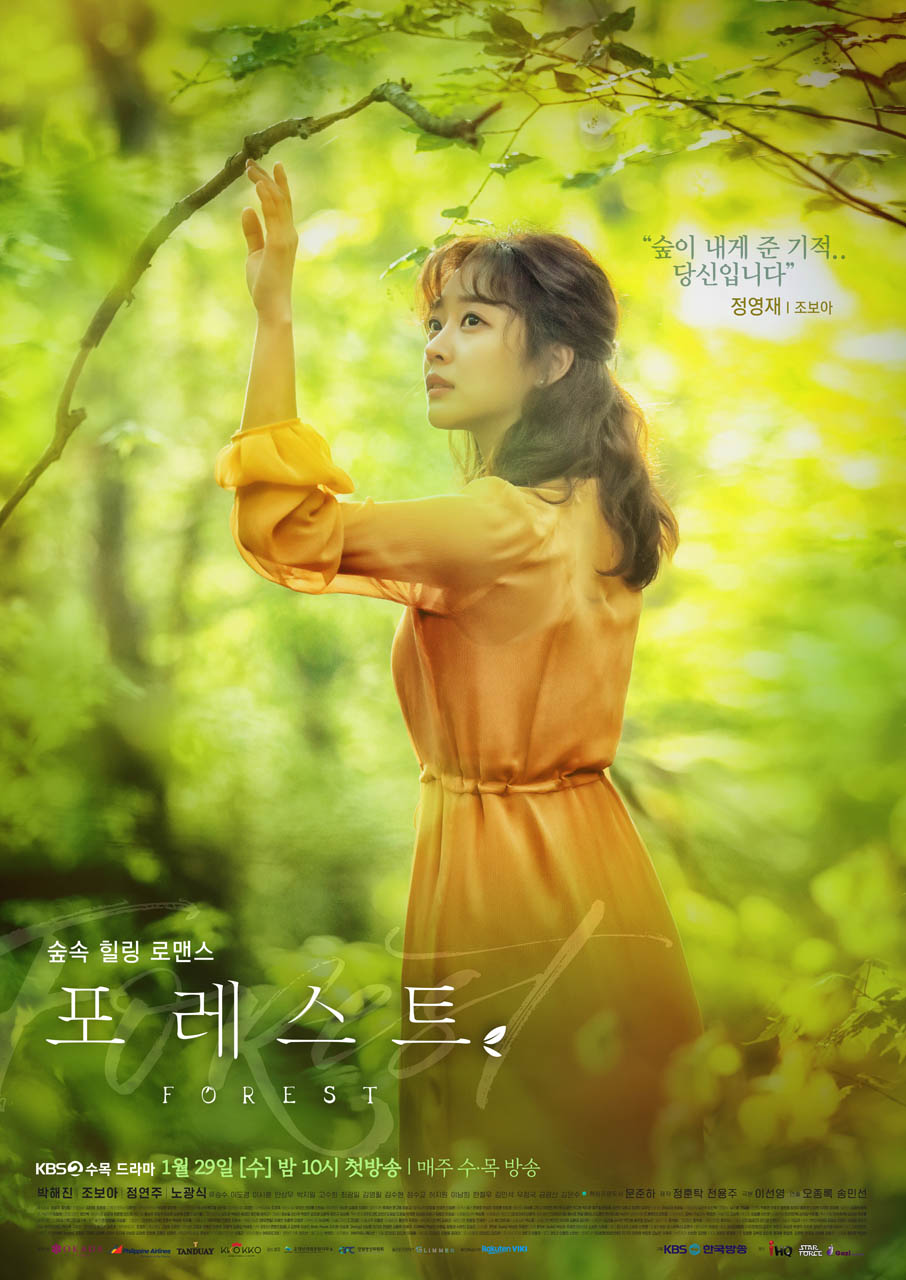 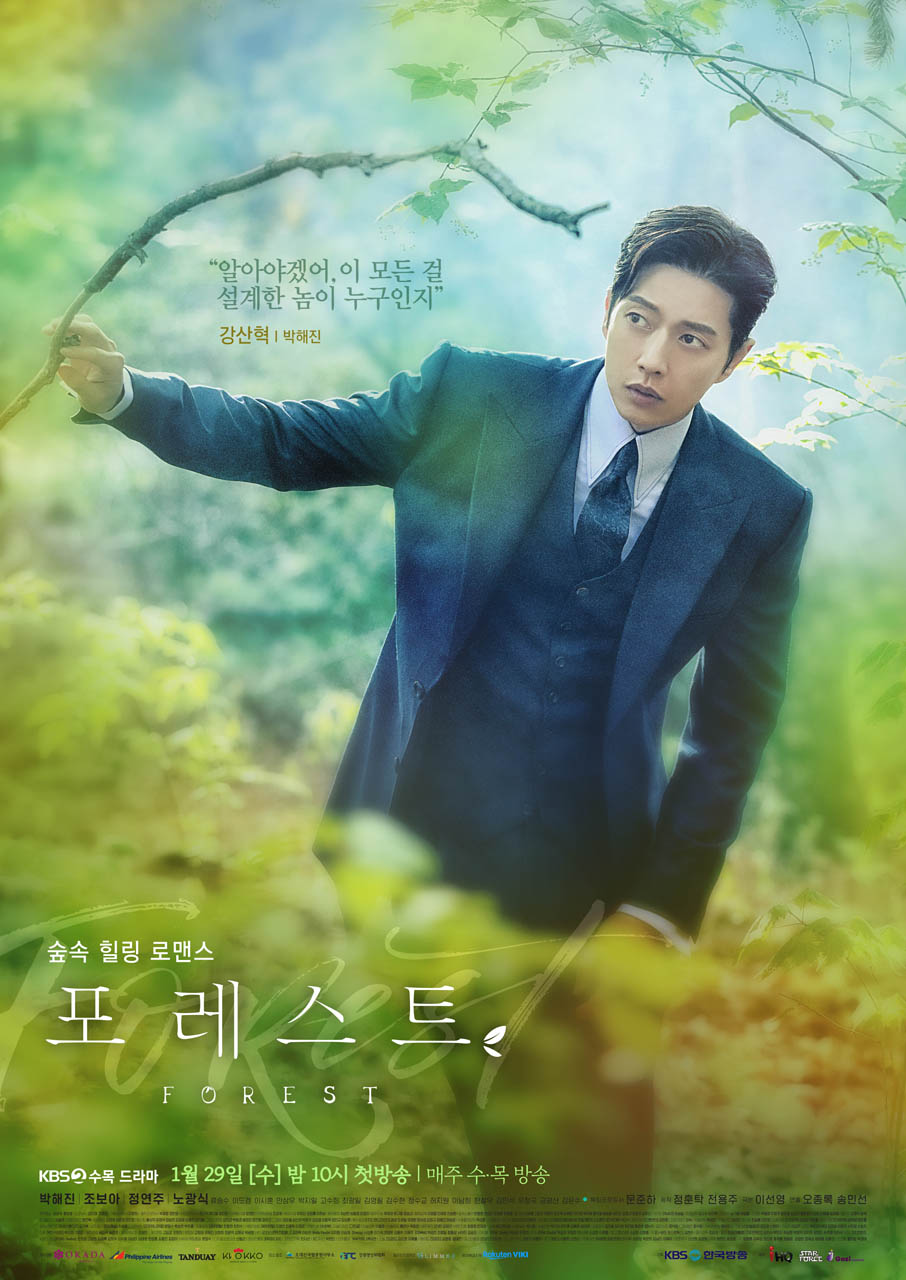 Park Hae Jin (Man to Man, Cheese in The Trap) makes his highly-anticipated small screen return after three years through the rom-com psychological series as the main character Kang San Hyeok. He portrays the role of a ravishing prosaic director of Red Line Investment – a leading investment firm in Korea. Entrapped in fragmented tragic memories of his childhood, Kang San Hyeok fills the gap of his painful youth with love as remedy.

Taking the female lead role is actress Jo Bo Ah (My Strange Hero, Temperature of Love) who plays the role of a fragile and sincere psychiatrist-turned-surgeon Jeong Yeong Jae. Due to her past ordeal, treating patients with psychological illness triggers her condition simultaneously, thus, making her quit psychiatry and shifts into being a surgeon.

Making his acting debut, DJ-actor No Gwang Sik envisions the role of Choi Chang, a sweet and soft guy and a member of 119 Special Air Rescue Team who has a loving father Choi Jung Mok (Lee Do Kyung).

Pairing with him is Jung Yeon Joo a righteous and blunt forest police officer. Playing the role as Oh Bo Mi, she delves the deepest secrets of the forest. 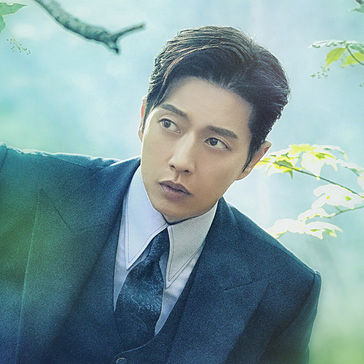 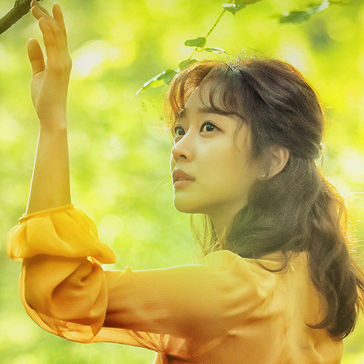 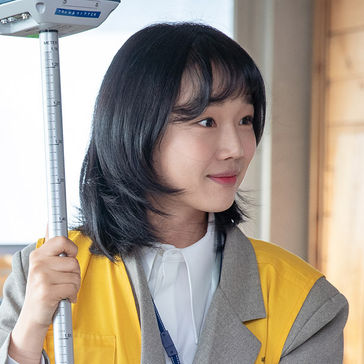 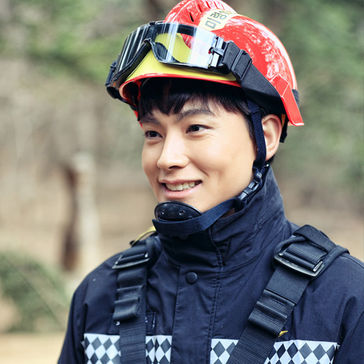 Settled in a mystic county of Miryeong Village, resides a strange forest with underlying secrets buried in its innermost portion. Kang San Hyeok, a specialist in Mergers and Acquisition partakes a job of being a rescue member of Miryeong Forest 119 Special Air Rescue Team to unveil the secrets of the forest and conduct A thorough research in establishing Asia’s biggest resort project in Miryeong Forest. He may look tough and complex externally, but deep down, Kang San Hyeok suffers from a traumatizing past he can’t even recollect.

Meanwhile, resident surgeon Jeong Yeong Jae was condemned for pursuing her own judgement as a doctor by saving the life of child from being killed by the latter’s father. She was later on dispatched in Miryeong Hospital of Miryeong Village. 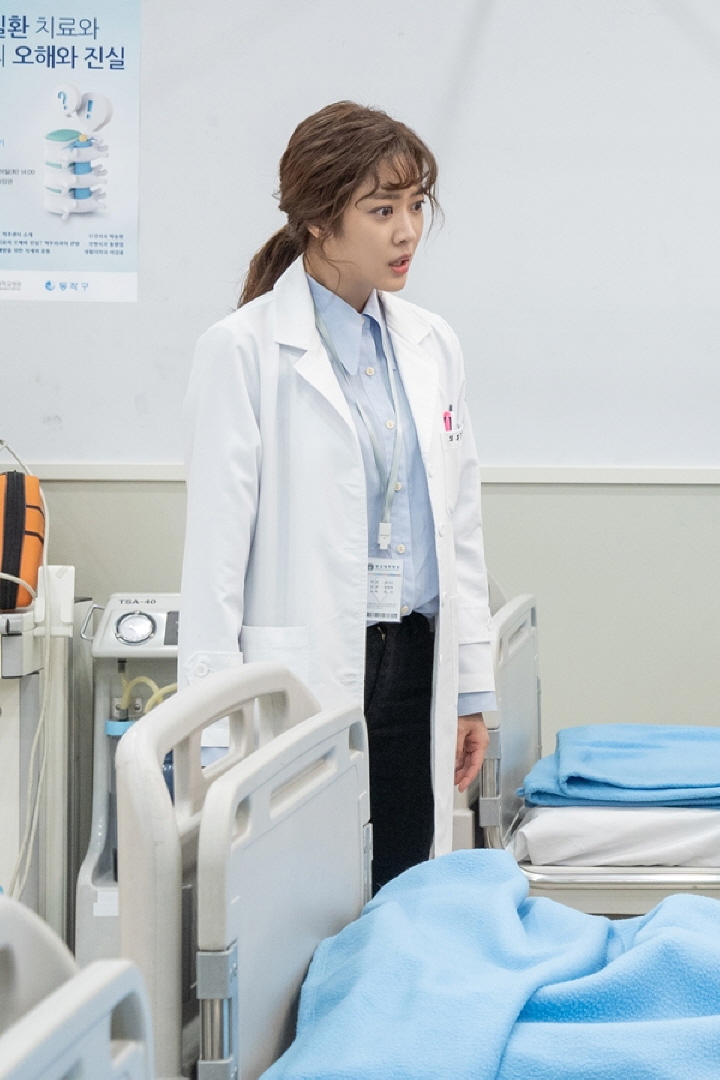 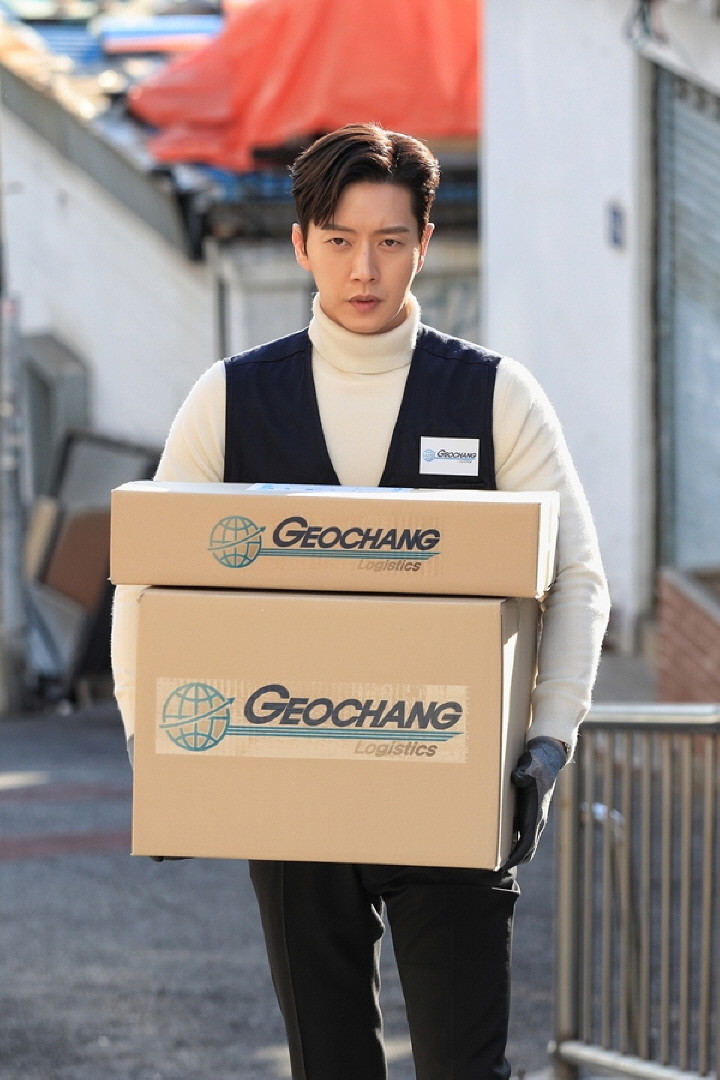 Then, as fate would have it, they meet certain times in unfortunate times and finding each other’s company as encouragement. 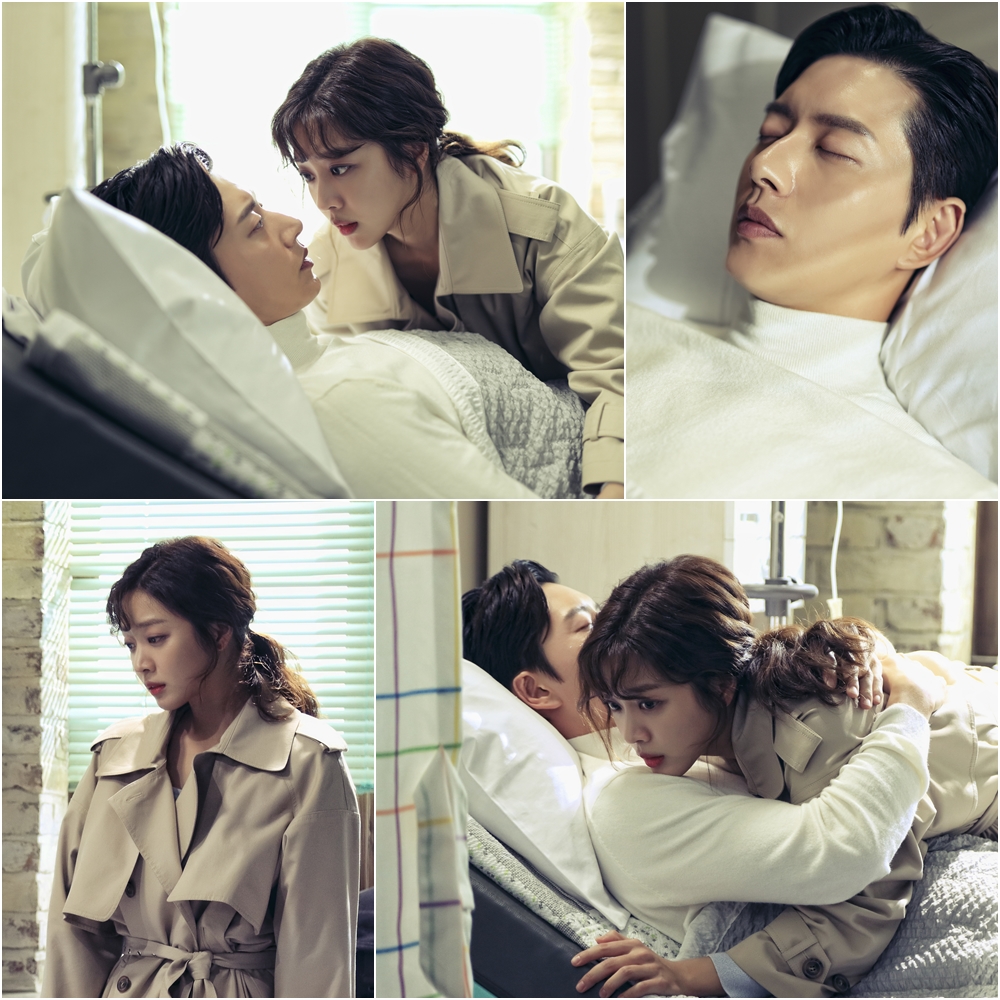 Hands down to the entire production team in filming this drama! Given the filming location itself and the topographic situation of the forest, it does takes a lot of labor to film and bring Miryeong’s Forest to life.

If you’re one of the urban dwellers dreaming of a serene life in the countryside, Forest is perfect for you. Filmed in Gangwon Province of South Korea, the drama’s aesthetically pleasing flavors successfully exhibit the visual wonders of nature into a whole piece. The always-on-point spectacle of lights in the dense canopies bring an enchanting element throughout the series. Away from the hustle and bustle of the big city, the drama takes the viewers into nature’s healing effect which satisfies human’s five senses.

The dreamy and eco-friendly home where Kang San Hyeok and Jeong Yeong Jae resides and cohabits will surely be in line of your perfect dream houses. 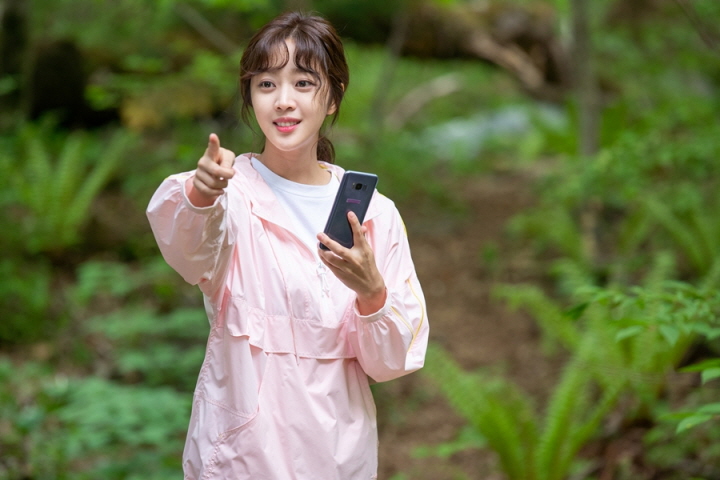 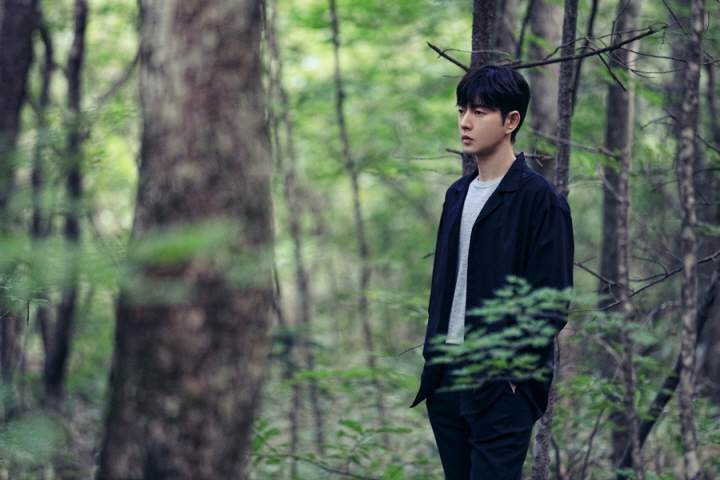 In a very patient manner, Forest gives light and significance of mental health. The two leads Kang San Hyeok and Jeong Yeong Jae are both victims of their agonizing pasts caused by evil forces surrounding them. Thus, as they grew older, they developed psychological distress haunting them even as they become adults – Kang San Hyeok’s phantom pain and Jeong Yeong Jae’s panic disorder. But physical wounds heal, so as emotional injuries. With therapeutic love and natural healing effect of nature, recovery isn’t far from reality!

The guys in 199 Special Air Rescue Team also suffer from trauma and emotional shock, which in time severely triggered by the nature of their work. Which means, there are several factors – internal and external elements that drives the birth of these cases. What Forest had in its hand is acknowledging one’s illness and detecting its onset as early as possible. Seeking psychological and psychiatric help aims mental development and wellness which shouldn’t be treated lightly since it is grave as physical health. 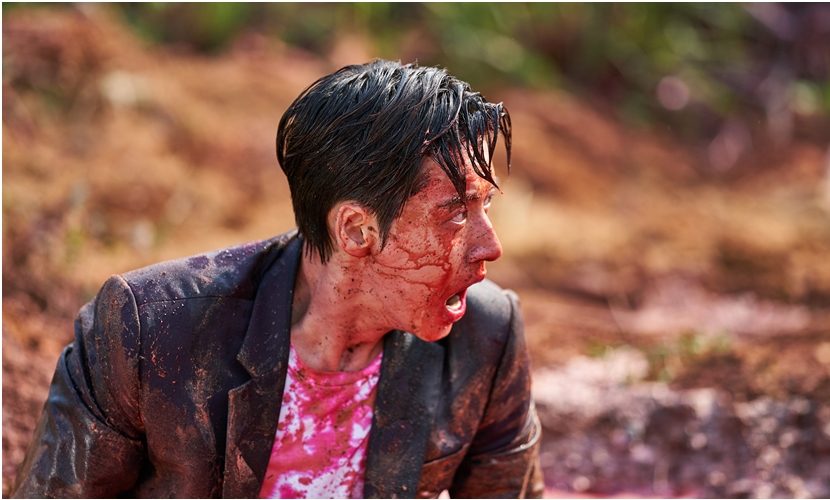 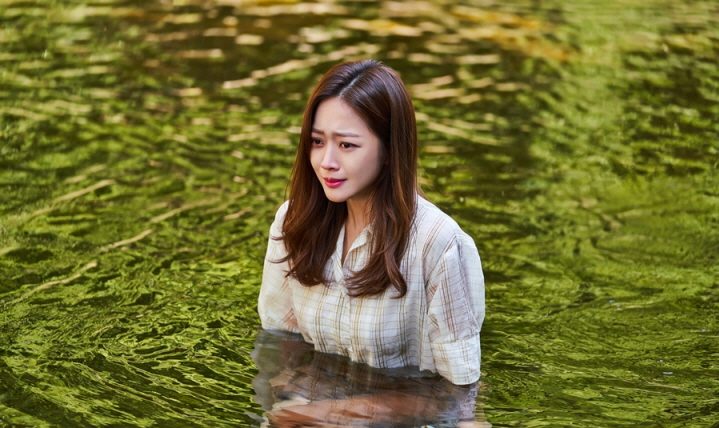 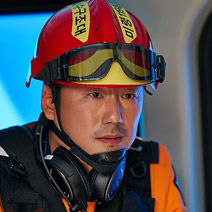 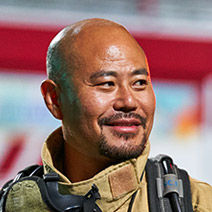 Heroine’s Authenticity Amongst All Characters

It is truly impossible for every character not to be that flawless and spotless being – and so are the drama’s characters. However, Jeong Yeong Jae’s flawed and frail personality reflects every women that despite the imperfections – if someone truly values, and embraces her strength and weak points, then he is absolutely and definitely the right man for that woman.

The trait of Jeong Yeong Jae who is not afraid of admitting her own flaws (her panic disorder) is rightly a commendable act of courage.

Moreover, despite the hardships in life (both her parents died), she overcame it with bravery and determination eventually without compromising her self-worth. 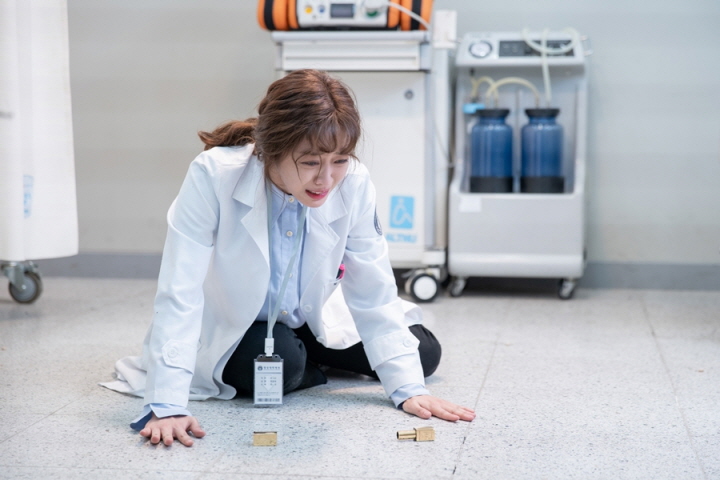 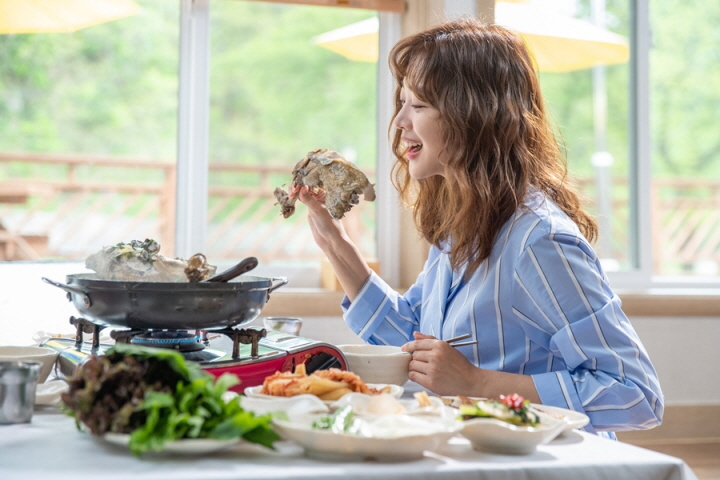 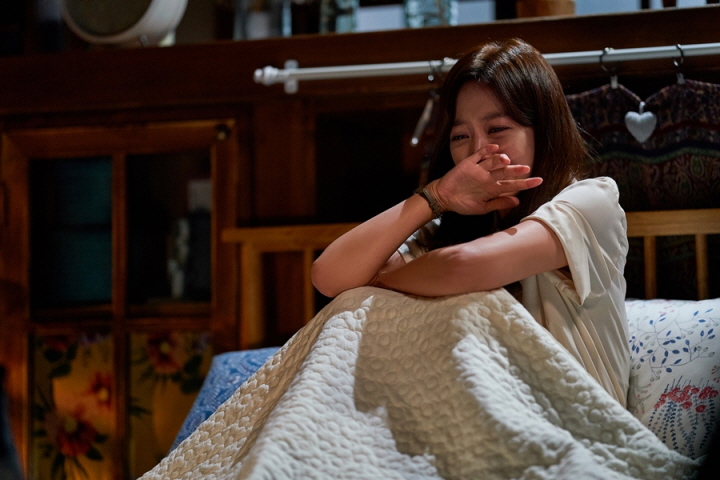 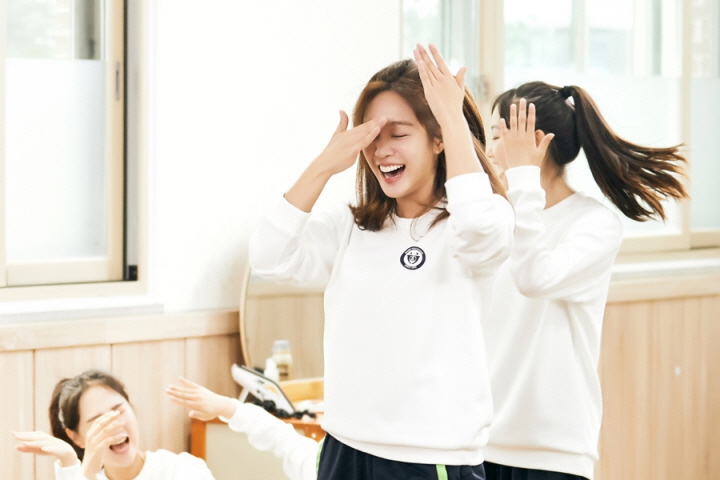 Here is one of the best note-worthy line of Jeong Yeong Jae in the series:

“About having to be in the public eye to get a proper validation, that is not true worth, it’s an illusion. The eyes of others are not needed to determine my true self-worth. I, myself have to recognize that.” – Episode 4 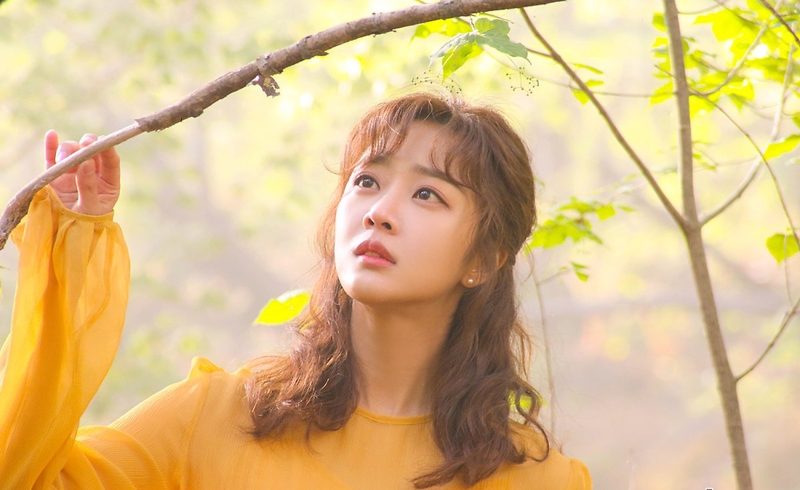 Jeong Yeong Jae only proves the most cliché yet genuine and uplifting phrase “The beauty is in the eye of the beholder” is what we live for!

Considering Forest as a romantic-comedy series, it cannot escape from the heart-throbbing and butterflies-in-my-stomach feeling. It serves an ample amount of romantic dose between the avant-garde couple of Miryeong Village in an understated and sublime manner.

In case you are expecting grand tumults and one-day development of love line, forgive me not, because Forest doesn’t keep an eye on the trite love tropes seen in other dramas. From having a turbulent relationship into being platonic cohabitants, the dynamic changes of their relationship were evident as the story progresses.

The mutual attraction between the two is slowly built up overtime as they get to spend more time together. Whereas pertaining to how affection and love doesn’t call for the much-oft transcendental kind of thing. It can be a gentle tinge that buds and springs in time with patience. 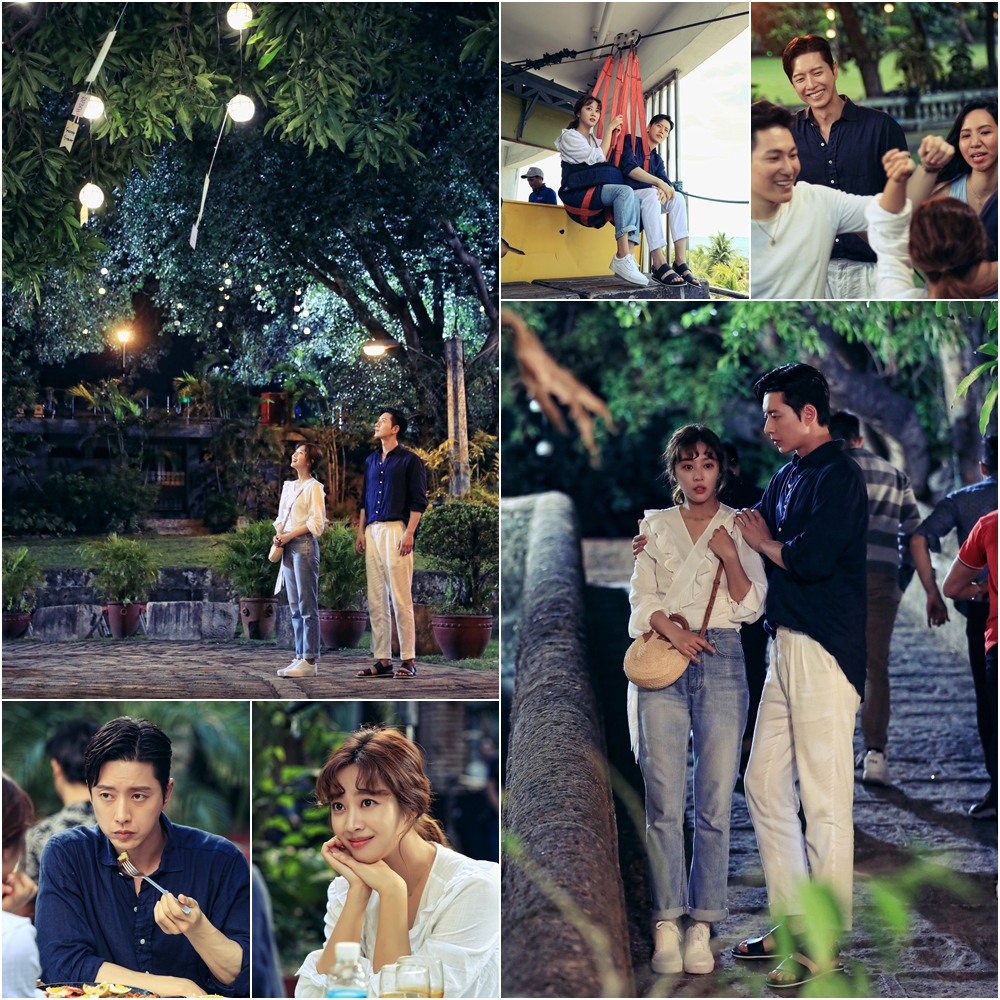 Taking care of yourself and the people around you is probably one of the best lessons imparted by this drama. Self-care should be everyone’s top priority right? However, Forest demonstrates that if you truly care for someone as much as you love yourself, helping someone won’t be a forceful thing but an act as a product of one’s great love.

Forest is magical story of two individuals gradually finding love in its known time. It tells that how much pain a person had gone through, if one has the courage and perseverance to set things right, all would fall into its own place. And just how the trees grow, the flowers bloom and the streams overflow in the forest, our life is a series of growth and failure, yet, in spite of everything, here we are waiting for our time to rise. 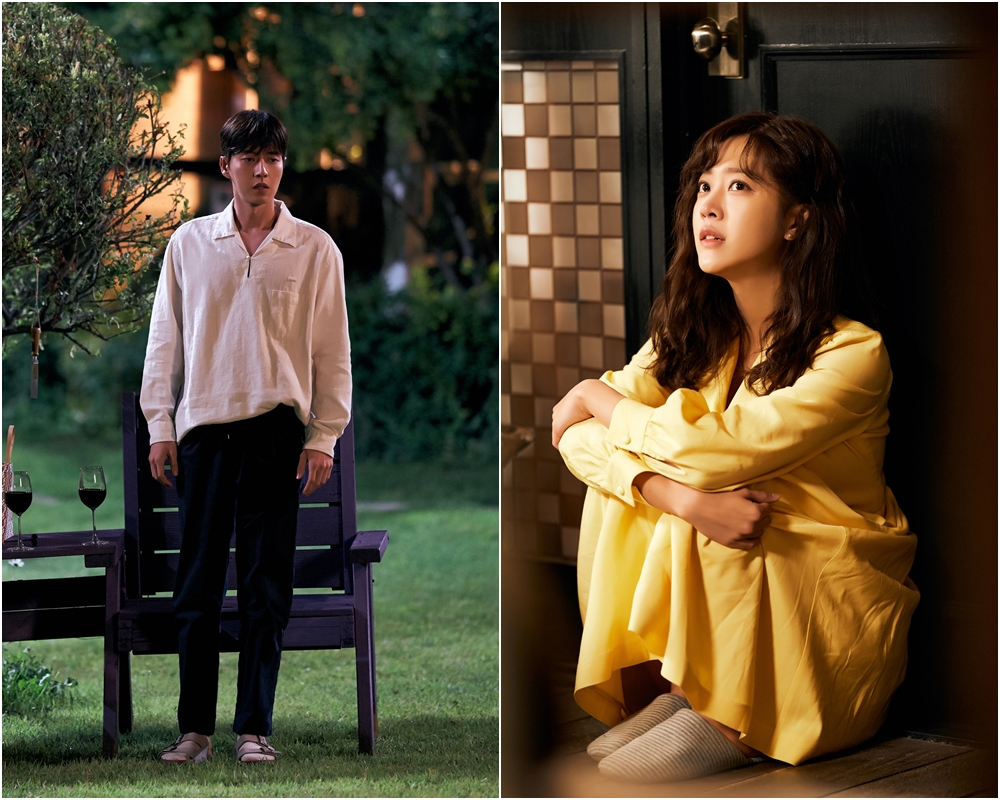 Forest may ambiguously thread the typical story of two lovers with tear-strained-past, the main setting of the story leaves a lingering affection thanks to the natural wonders shown in the drama. Despite of plot holes and facile unraveling of the devilish crimes in the past, the emotions are wonderfully portrayed by the two actors with great chemistry.

This one offers nature-lovers and wanderlusts – a paradise wrapped with beautiful life lessons, mellow and appealing romance all packed in one great drama.