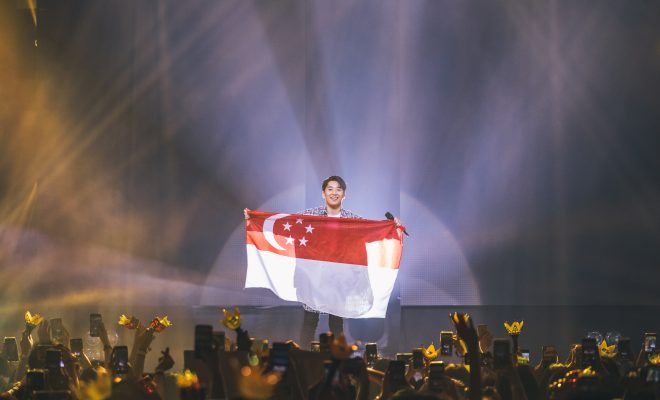 You know the old saying that goes – time flies when you are having fun? That was exactly what happened in The Great Seungri Tour in Singapore.

It was a night filled with boisterous laughter and great performances from no other than BIGBANG’s ever charming maknae – Seungri.

Living with its concert title, Seungri truly put the “Great” in his show. With only two dancers to back him up, Seungri’s presence was enough to fill the 1.5 hours concert.

Seungri presented the show as himself and not just one of the members of the K-Pop royalty BIGBANG. With his stellar performances and comedic acts, he delivered the best show possible.

Though the concert started a bit late, the fans’ energies did not discourage. Once the lights went dim and music came out loud, the hall was immediately filled with echoing screams as the crowd waited for Seungri to come on stage.

In no time, The Great Seungri Tour started and all heads went loose.

Starting off with BIGBANG’s “Bang Bang Bang”, he made all the crowds sing, dance and sway their arms with the golden flower lightstick, creating the familiar sea of yellow lights. He continued on with another fiery performance of “Let’s Talk About Love”.

After the first two heart-pumping songs, local fans were treated into a night of laughter and outstanding performance that anyone could not expect.

Read : Seungri Slays The Night At The Seoul Stop Of “The Great Seungri Tour”

Seungri is well-known as an all-around entertainer and that is what makes his concert unique. He can sing, he can dance,  he can act, and most of all, he can do a comedy show.

From his album The Great Seungri, he sang “Alone”, “Where R U From” and “Hotline”. At the end of the songs, he smartly quipped “welcome to my diet program” as everyone was seen jumping in every song of the set.

He intoxicated the crowd into party mood with BIGBANG’s smash hits, starting off with “We Like To Party”,”Heaven”, “Hands Up”, “Lies”, “Crooked”, “Good Boy”, and “Bae Bae”.

Continuing to bring the greatly missed BIGBANG moments, Seungri made everyone feel sentimental with “Eyes Nose Lips”.  He ended the set with “Flower Road”, the group’s gift to their beloved fans before the military enlistment hiatus.

With a short pause, he fired up the stage with his encore performances  of  “1,2,3”, “Strong Baby,” and “Fantastic Baby”, making the concert goers asking for more.

Before the concert ended, he serenaded the audience with a heart-warming “In My World”. It was almost a perfect song, but his voice cracked right before the start, bursting the crowd into laughter. Nevertheless, he performed it smoothly.

What made The Great Seungri Tour in Singapore special? It is definitely Seungri’s amazing interaction with fans, leaving no dull moments. At the end of each song set, he sportingly engaged with his fans, turning the concert into a reality comedy show.

These best moments which happened that night would prove what we just said.

“I Am The Best Singapore Accent Korean Artist”

A master of languages, Seungri has proven that he can pick any other accent in a short period of time. He spoke Sing-lish like a local, like “Are you having a good time lah? “,”Are you ready for this lah?”. He continued to blab about Singapore, mentioning that he loves chili crab.

He taught us to be positive despite challenges. Here are some words of wisdom we received from him:

First, on seeing some empty seats on stage, he took it on a lighter note and said “I can see empty seats! Fine! Fine! I don’t care because I have you guys. It doesn’t matter”.

Then, when you feel that your hard work doesn’t pay off, take it from him – “My Company didn’t give me the job. I always make the job myself. Come on guys, that’s life.”

Connecting With Music and Language

Seungri is a fluent speaker of Japanese, Chinese and English. With this, he flaunted his Chinese-speaking skill by singing  “The Longest Movie” by Taiwanese artist, Jay Chou.

He also wished that in the future, a lot of people will be able to speak a lot of language.

For the love of the VIPs, he personally picked and brought in the world class equipment on stage; from the lights, LCD, amplifiers and effects.

Watching the concert was like watching a variety show. Here are some Seungri’s funny lines that made everyone laugh their hearts out.

Seungri was doing his ment when he asked the people to sit down. From the stage, he heard some fans said “No”. He jokingly said: “Don’t be mad, I’m trying to be nice. Be nice please.” This made everyone die with laughter.

After he sang his heartwarming Jay Chou cover song, he again injected humor and said:” Why Singapore people mad?” He heard someone said, “Very Good.” To this, he responded: “Guys, let’s be nice. Just talk to me nice. Just say to me ‘very good’ (in a sweet manner) and not ‘VERY GOOD’!” Again, the crowd chuckled at his remark.

The BIGBANG’s Lightstick’s Other Purpose.

In one of his ments, the BIGBANG lightstick caught his attention and said “that golden stick can be used for emergency when the lights shut down.”

He Did Not Forget About His Hyungs

Even though he came to the stage himself, he did not forget about his fellow members and continued to bring humor to the crowd as he made fun of his hyungs.

He mentioned, in his alone time, he searched BIGBANG in the internet and showed the crowd the funny pictures he got. In one of the picture’s, G-Dragon‘s epic sushi hairstyle, drew thunderous laughter. Since then, he never eats tamagoyaki ever again.

“Keep Shining Until We Come Back”

VIPs surely have been missing BIGBANG in heaps. With this, he mentioned that GD, Taeyang and Daesung are coming out from the army this year. On the other hand, his enlistment is imminent, but he will also be expected to be released after next year.

Moreover, Seungri did not forget to thank fans for their continued support, as he ended: ” Thank you guys for supporting us. BIGBANG shines because of you guys. Please also keep shining until we come back.”