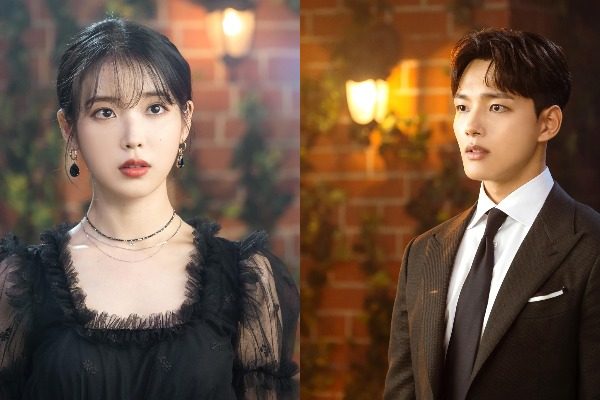 The episode shed some light into Jang Man Wol’s past as well as the stories of the hotel’s staff.

Hotel del Luna episode three took a break from spooking its viewers. It focused more on Jang Man Wol’s life before she owned the freaky hotel. Though a ghost-related side story has been shown, it put more emphasis on the backgrounds of the souls running the place and serving the hotel’s distinct clientele.

The third episode also gave a little bit of information about the hotel’s interior. As well as its unique character which clearly put the establishment in a league of its own. 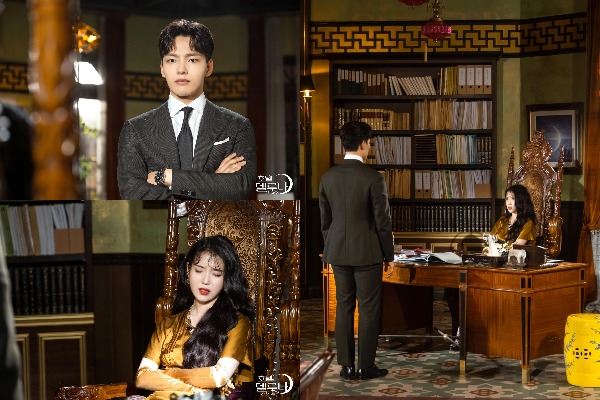 A royal princess is traveling together with her entourage when a group of nomad intercepts them. The men go after the party’s possession. When a young man takes a parcel off the princess, a royal guard fights him off. Man Wol, watching everything from a distance, fires her arrow towards the two men having a sword fight. The princess’ guard senses the incoming arrow and he is able to deflect it. The woman blows her whistle and her men scurry to leave while the royal guard chases after her.

He is able to catch up with her and tussles her to the ground. He pulls off the scarf covering her face and he is momentarily stunned. With the man unable to move, Jang Man Wol hits him with a rock. As he loses consciousness, she ties him up and takes him as hostage. As they travel, the guard continues to ask her to release him, saying that a lowly guard would not generate more profit for her. 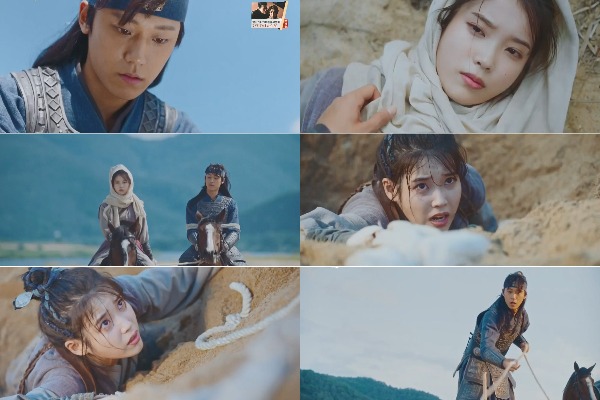 She stares him down and says that he notices the princess’ worried look when she saw him fighting with one of Man Wol’s men. So, she is sure that his handsome face will likely get her some money. She startles when one of the horses runs away. Man Wol goes after it to get it back, but she gets stuck in a quicksand. Begging for the guard’s help, she has no other choice but give him her sword. When the guard breaks his ties, she thinks he is not going to help her out, but he tosses her the rope.

Thinking he has the upper hand, he reveals that he is not just an ordinary guard, but the Captain of the Royal Guard and declares she is now her captive. Unfortunately for him, the young man he fought earlier finds them and throws a rock at him which knocks him out.

Goo Chan Seong gets a tour of the hotel

The old lady, who brings flowers to the souls, interrupts Man Wol’s reverie. She asks if she is looking at the present moon or if she is seeing a moon from a thousand years ago. Despite Man Wol’s snarky answer, she commends on how blooming the flowers have become and says she must have served the guests well. Man Wol gets worked up by the old woman’s words and decides to leave. The woman, on the other hand, stays and touches one of the tree’s branches where blue flowers instantly bloom. 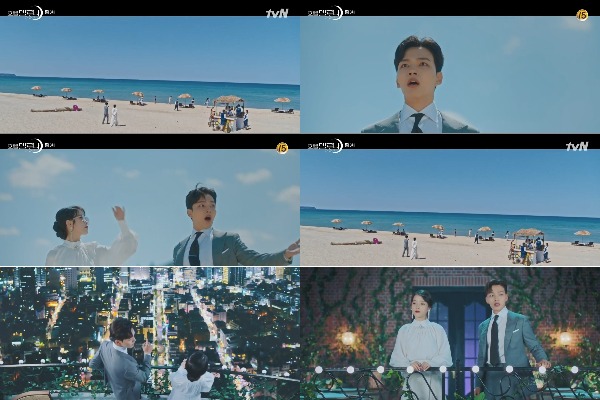 She goes to where Goo Chan Seong peacefully sleeps and places the flower buds on his chest. Chan Seong wakes up after having a dream about Man Wol. She offers to take him on a tour where she divulges that the hotel looks ordinary on the outside, but there are certain times when normal people see its true identity. Man Wol takes him to the swimming pool area.

He soon finds out that the pool is actually a beach, complete with sun and sand. She tells him that it only exists inside the hotel and time works differently in there. She soon takes him to the Sky Bar where it overlooks the city lights. However, Man Wol reveals once again the things that exist in the hotel he can’t find in the real world.

Goo Chan Seong asks if her case is the same with all the things inside the hotel and she answers yes. She comes closer and places her hand over his heart. She tells him to stay by her side and he accepts. He adds he is curious about her and the hotel too, but tells her he wants real benefits and compensations.

Meanwhile, a student falls off the overpass and dies. Her soul is attached to the necklace that is now in the possession of the student who bullied her. Kim Yoo Na stays in her room staring at the necklace when she feels something drips from above and comes face to face with the bloodied soul of her classmate. It enters her body and her own soul gets thrown out.

The employees of Hotel del Luna talks to Man Wol asking her if she could rescind Chan Seong’s appointment. They remind her of two people considered for the job. One becomes an exorcism priest who uses the ability she gave him to chase after evil spirits. The other one opted to work in outer space. She tells them that she now has a new manager and that is Chan Seong. 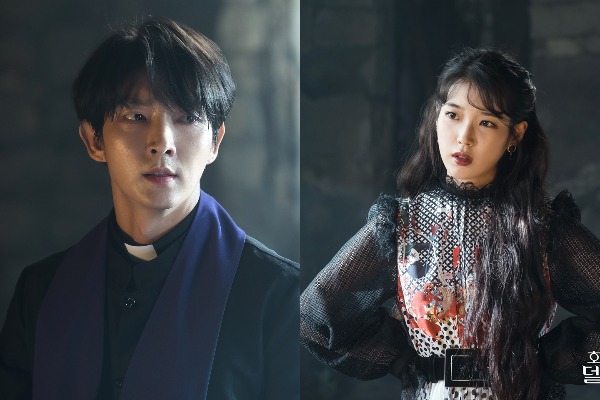 Alone inside his office, Chan Seong wonders if he accepted the job easily. The three employees enter the office and introduce themselves. He confirms they are all ghosts and learns that Kim Seon Bi (Shin Jung Geun), who died 500 years ago, is the longest employee. He serves  as the bartender. Choi Seo Hee (Bae Hae Sun), dead for 200 years, is the hotel’s cleaning lady. Meanwhile Ji Hyun Joong, the youngest and works as the hotel’s receptionist, died 70 years ago.

They continue to tell Chan Seong their previous lives. Seon Bi says he was an aristocrat who just passed the civil service exam but unfortunately died before he was able to fulfill his dream. His soul wandered and ended up in the hotel, then called Man Wol’s Inn. 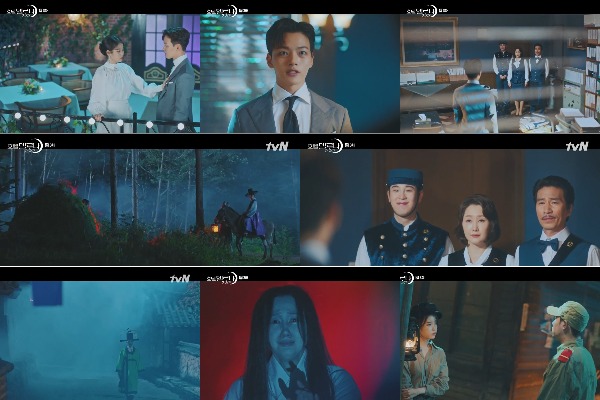 As for Seo Hee, she tells him she was the oldest daughter-in-law of a respected family, but they ended up murdering her. She is now waiting for the last family member to die. Hyun Joong recounts he died during the Korean War. He is waiting for his sister who is still alive before going to the afterlife.

During their conversation, Chan Seong asks if Man Wol is just like them, who started out as guest, but ends up staying longer. Hyun Joong says she was not a customer, but rather the owner of Hotel del Luna. Seon Bi counters that she is not the owner, she is there at the hotel serving a punishment.

Hyun Joong also mentions about the tree in the garden, but Chan Seong says he does not know the hotel has a garden. Seo Hee says that he was probably not taken to it because Man Wol determined it is not important for him to know.

Goo Chan Seong goes back to his place still thinking about the night’s revelations. He notices a blue petal on his suit pocket, but when he touches it, it dissipates. He mutters to himself that he is taking a piece of the fantasy world to reality. Chan Seong wakes up after dreaming about Man Wol once again. As he thinks about his dream, Man Wol calls him and tells him to find a buyer for the Mount Baekdu painting.

While driving back to the hotel, he sees two students fighting, one of them is clearly a ghost. Kim Yoo Na senses that Chan Seong can actually see her. So she blocks his way and gets on his car. He then brings her to the hotel which irks Man Wol, because he has brought a spirit that is not completely dead.

After learning of the girls’ connection, they decide to visit Yoo Na’s house. Man Wol is excited to see how Yoo Na’s parents will pay for their daughter’s misdeeds. Chan Seong is able to prevent the student from jumping off the bridge. He learns that Yoo Na has been bullying her and she is the one who caused her death. Yoo Na’s parents toss the necklace into the fire, completely eradicating the soul of their daughter. 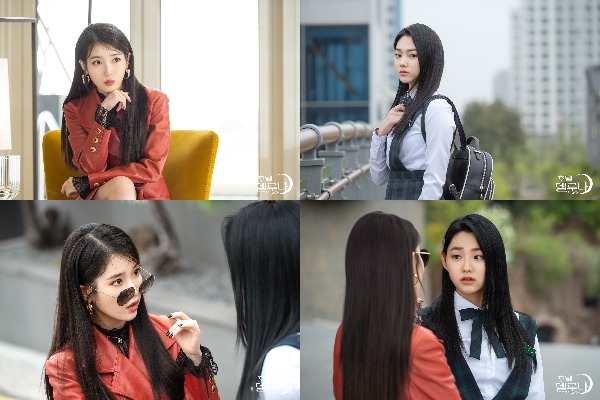 Hyung Joon once gain blabbers that there were two other candidates for Chan Seong’s position, and he was third in line. While in her office, he sees an image of a tree and looks for it. He winds up in the garden, and in front of him is the mysterious tree. Chan Seong blurts out that he knows there were other people up for the managerial post. He says he knows he was last in line. Man Wol catches him off guard when she says he was never the third in line as he comes before the first and second choices. She reiterates it has to be him.

Chan Seong reveals that in his dreams he sees her smiling underneath a big tree. She brushes off someone’s remark about building a house for her, but she was happy. He tells about her drinking under the bright moonlight with musical instruments playing in the background together with her laughter. Chan Seong also speaks of the man who taught her how to write her name.

He asks her if that person is someone she misses the most and that she has been waiting for him all this time. Man Wol wonders how he is able to see those things, but Chan Seong has no clear answer. Rather he tells her that she has been occupying his thoughts a lot after seeing her.

This drama is getting more interesting as it has been delving into the characters. The stories of the staff gave personality to the souls who have been working at the hotel. Man Wol’s past is also intriguing as it revealed the kind of person she was. It was clear that she did not have it easy. Their group had to roam and steal from people to make a living. Her attachment to material things and her urge to acquire them are aspects of her personality that remain unchanged. True, a thousand years before, she did it for survival but as time goes by, she does it to distract herself.

I like how tough she is even from before, being the leader of the band of thieves despite being a woman. Her snappy replies were a part of her character from the beginning and the years just made it even snappier. I still love how Chan Seong sees through her, and even though he knows she is a lot stronger and more powerful than he is, he continues to challenge her. 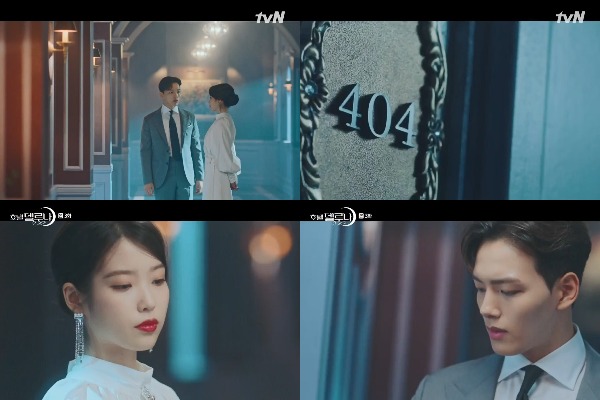 There is a connection between Chan Seong and the Royal guard. I am curious to discover how they are related. Yoo Jin Goo and IU continue engage with their great chemistry and their take on their respective characters. Lee Joon Gi and Lee Si Eon’s cameos were such a nice touch and the mention of Park Il Do made me want to re-watch The Guest.

I also like how the drama unveils the hotel’s weakness and how real life can affect it. Certain things enable ordinary people to see the hotel and that actually makes sense as it is still a part of the human world. Anyone else curious what is inside room 404? I am very much eager to know.

Next episode is shaping up to be an exciting one. I want to see how Man Wol will handle Chan Seong’s revelation. Things are changing and I can’t wait to see how these changes will affect the world that exists inside Hotel del Luna.

Hotel del Luna airs on tvN every Saturday and Sunday at 9:00PM KST.