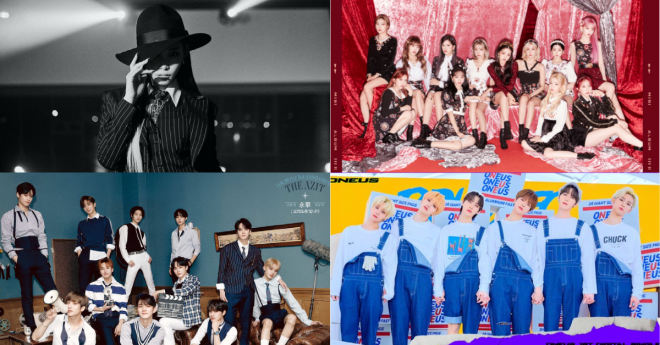 As 2020 winds down, many K-pop artists deliver fans with one last exciting comeback to end the year memorably!

Despite the many challenges of COVID-19, the K-pop industry and its artists admirably bounced back. Delighting fans with various digital events and releases, both soloists and idol groups alike attempted to stay connected to their supporters during this distancing time. As the whirlwind year of 2020 comes to an end, many K-pop groups plan to conclude the year memorably with grand comebacks.

VICTON plans to make their return with their first full album titled, VOICE: The future is now. The group’s concept image teases a glimmering, royal concept for VICTON’s return following their single album Mayday. Though the group planned to release their album on December 1, their comeback was postponed after an external staff member was diagnosed with COVID-19. In alignment with Seoul’s safety procedures, several Play M staff are quarantining, resulting in a delay of the comeback schedule.

Following the recent celebration of her 20th anniversary since her debut, soloist BoA makes her return with her 10th album titled BETTER. The singer teased fans with a series of concept images across her SNS platforms, hinting towards a grand and powerful upcoming release. The new album will include a total of eleven tracks showcasing the artist’s different musical colors.

ONEUS deliver their first-ever digital single titled “BBUSYEO” to kickstart December. Mixing both neon and pastel color palettes, the group’s music video teaser showcase ONEUS’ boyish charm. Additionally, the playful backtrack of the single has many fans anticipating a fun release from the up and coming boy group.

Rookie boy group VANNER will release their second single album titled 생(生) on December 6. The album contains the title track “FORM” as well as a b-side “LACHATA”. The group raised anticipation for their comeback with an intense music video teaser featuring an intriguing poker game.

To celebrate their third anniversary since debut, THE BOYZ will release a special Christmas single on December 7. The month brings in a celebratory period for the group and their fans as they celebrate not only the winter holidays, but all the achievements THE BOYZ made since debuting. Fans eagerly await “Christmassy!” and the festivities to follow as the group concludes another milestone year with their fandom.

2PM’s Jun. K will release his third mini-album called 20 mins to his awaiting fans on December 9. This follows his last solo project in 2017 and teases a sentimental concept with its concept image featuring two x-rayed hands enclasped, one with an intricate watch on its wrist.

The recently debuted rookie group GHOST9 excite fans by announcing their second mini-album is in the works! PRE EPISODE 2: W.ALL drops on December 10. The speedy comeback following their debut album is anticipated to show more of the group’s distinct style and worldview.

Global superstar CHUNGHA will release her first-ever studio album since debuting in 2017 in the new year. The album will be called QUERENCIA, releasing to fans in January. However, just ahead of its release, CHUNGHA gifts fans with a pre-release track titled “X”, building upon fans’ excitement for her subsequent projects.

Soloist Baek Yerin will release her second full-length album tellusaboutyourself on December 10. The title of the album, as well as the concept teaser images unveiled across the artist’s SNS platforms, tease a more intimate look into the singer’s identity with this newest project.

Alternative rock band ONEWE excites with the news of their upcoming comeback. The band will deliver their first single album called MEMORY: illusion. Featuring a reflective mirror and a stack of novels, the concept image for the release incites fans’ curiosity towards the mysterious concept.

December 1 — VICTON* returns with album VOICE: The future is now

December 4 — KATIE returns with EP Our Time is Blue

*due to a COVID-19 case of an external staff member, VICTON’s comeback will be postponed until further notice as related Play M staff undergo voluntary quarantine

FacebookTwitter
SubscribeGoogleWhatsappPinterestDiggRedditStumbleuponVkWeiboPocketTumblrMailMeneameOdnoklassniki
Related Items2pm jun k.Baek YerinBoAChunghaDecember 2020 comebacksGHOST9IZ*ONEKatieoneusONEWEThe BoyzVANNERVICTON
← Previous Story All The Beautiful Love & Life Lessons We Learned From The Memorable Lines Of “More Than Friends”
Next Story → Online K-pop Concerts To Look Out For This December 2020