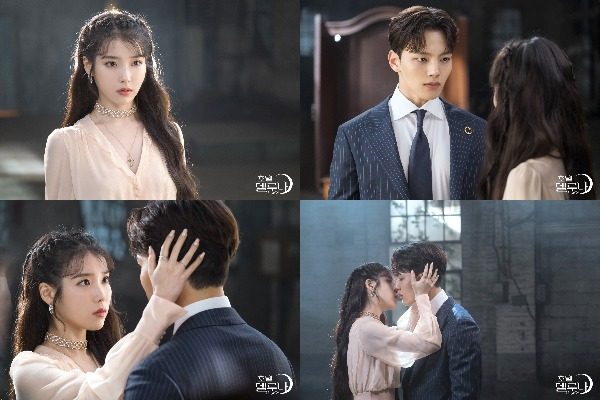 Goo Chan Seong is shaking things up in the hotel that baffles the staff, and most of all, Jang Man Wol.

Hotel del Luna episode 4 continued to provide a deeper view into Jang Man Wol’s past. Viewers get to see couple of ghost stories and an introduction to a scary guest occupying room number 13. The latest episode has also given a name to the inquisitive and meddling old lady.

The changes are starting to manifest. Man Wol, clearly rattled by Chan Seong’s dreams about her past, is torn between hating or keeping him. 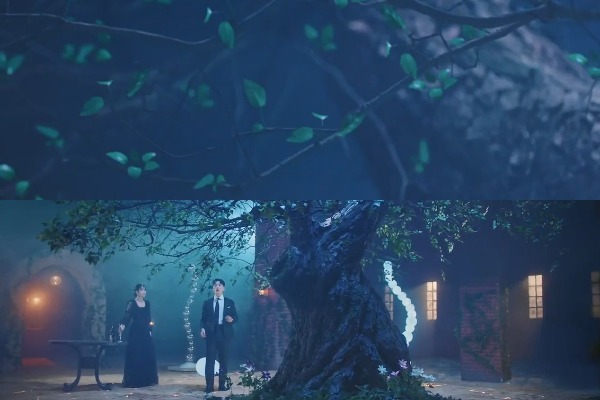 After his confession that he saw how happy she was and that there was a man who taught her how to write her name, Man Wol questions him on why he dreams about her. Chan Seong has no explanation for this, but he says that perhaps he is there to help her solve something she has not figured out yet. He turns towards the tree and touches a branch.

Much to their surprise, leaves start to grow on its lifeless branches. Man Wol recalls what the old lady previously told her that she is not dead yet and that the flow of life and death stops for her. The old woman adds that she is connected to the Moon Tree and her time will soon begin to move again

Man Wol shows astonishment at seeing the tree showing signs of life. She voices that Chan Seong might be someone more special than she thought. When he asks why the tree has changed, Man Wol tells him it is his doing. She says that because of him past memories resurface, and he made the tree look ugly. Man Wol adds that he should be treated unfairly because he already provoked her. She is mad that he saved something that should never be saved. 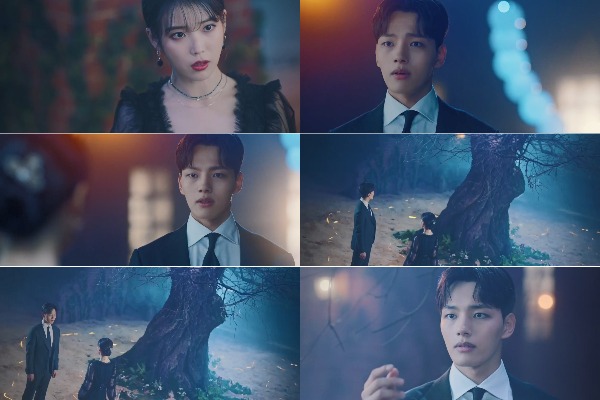 Chan Seong inquires if she feels embarrassed he is able to see her past to, which Man Wol answers yes. She touches him and transports them into a room. She pins him on the bed and commands him to sleep so she can see if he is telling the truth.

Chan Seong argues he can’t sleep, let alone dream, just because she wants him to. Man Wol threatens to kill him if she finds out he is lying. Chan Seong responds that she just wants it to be a lie, because she is upset that he saw her past. He adds that he will no longer tell her about his dreams because now he knows how much she hates it. Man Wol, still angry, gets off the bed and walks out of the room.

“There’s no way you are him”

Chan Seong follows Man Wol to her office and asks if the memories he unearthed is causing her so much pain. He continues to inquire about the identity of the man. In response, Man Wol questions him if he thinks he is that man.

Chan Seong reveals he did consider the possibility, that perhaps the dream is connected to his past life. She scoffs after hearing it and confidently states that the possibility is extremely remote.

He challenges her and says that he has been consistently seeing her past in his dreams. That maybe they go a long way back. To prove her point, Man Wol places her palm on her chest, where his heart is located. She reveals that she feels nothing and she will not feel that way if Chan Seong is really him.

Chan Seong expresses relief after hearing Man Wol’s reason, but he continues to annoy her with his questioning. Man Wol decides he should take care of the guests from now on. He meets a guest in a terrible condition, and he can’t seem to do his job. With much prodding from Ji Hyun Joong, he faces the client and asks her a question, but he almost immediately flinches when the ghost speaks. Hyun Joong senses it is not going anywhere, so he takes over and assists the ghost. 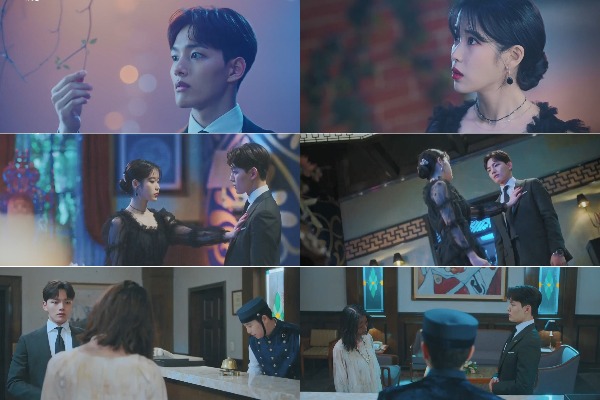 He asks Hyun Joong more about Man Wol’s “punishment”. But being the youngest employee, he does not seem to know much else. Despite bragging about getting used to seeing ghosts, Chan Seong decides to forego the front desk duty. He settles in the bar where ghosts are mostly clean and look like normal human beings.

During his conversation with Bartender Kim Seon Bi, Chan Seong finds out that the supplies in the hotel comes from the good energy left by the ghosts who were satisfied during their stay before proceeding to the afterlife. Seon Bi also reveals that the money Man Wol gets from some of the Hotel del Luna’s customers, she uses to maintain her lavish lifestyle. 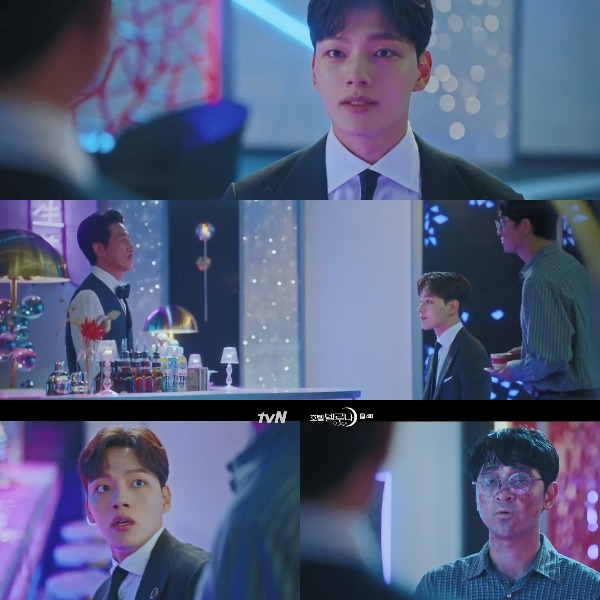 Meanwhile, Man Wol is once again in front of the tree and she is furious about the turn of the events. She directs her anger towards the old woman and says she is playing some tricks with her. She throws a champagne glass at the tree and some kind of force surrounding it makes the glass shatter before even reaching the tree’s body.

While sitting in the subway train, Chan Seong wakes up from having another dream and remembers the name of one the men that was with Man Wol. Suddenly a woman holding a basket of white lilies is standing in front of her. He asks for the price saying he wants to buy one but the lady waves him off. She then reveals that she has already given him his flower.

She continues by saying that his father almost died after getting him some flowers. Because of it, he learned to live a righteous life and raised a great son. Chan Seong suddenly remembers the incident back in 1998 during his birthday. 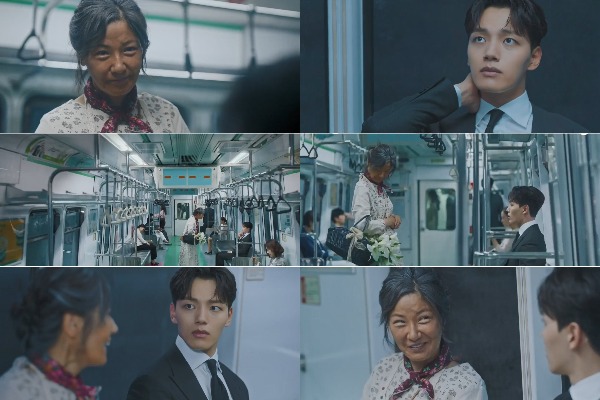 Ma Go asks him about working in Hotel del Luna and Chan song counters by asking if she sets things up. The old woman does not answer directly but says she only opened up a path. She also tells him she wants him to take care of the tree she planted. The tree has grown with a lot of spikes and becomes so unfriendly. She offers her a card with an information on how to find her if ever he faces some problems as he looks after the said tree. Then she disappears.

Chan Seong searches for her but ends up witnessing the limousine fetching a soul holding Ma Go’s white lilies. As the man enters the vehicle, the spirit of his dog comes running and Chan Seong lets them reunite. He remembers his conversation with Seon Bi that when a soul goes out with Ma Go’s flower, it ends up in a good place. Chan Seong soon realizes that the lady he met 21 years ago and the old woman in the subway is Ma Go.

Helping out a ghost

The very first ghost Chan Seong brought to the hotel went out instead of hopping on the limousine to afterlife. He soon discovers that the woman is trying to look for the man who has shown her kindness when she was alive. However, since she was blind, she does not know how he looks like, but she could recognize his touch. He manages to secure Man Wol’s signature to defer the woman’s trip. With the help from his friend Sanchez, he finds the man the ghost is looking for. 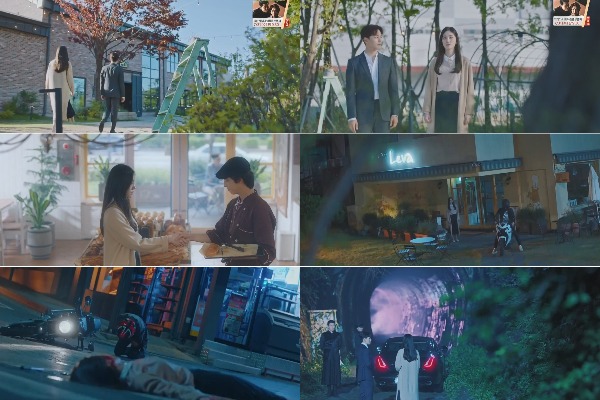 Feeling happy with his deed, Man Wol bursts his bubble by saying some things are not what they seem. She reveals that ghosts usually remember the last thing that happened to them before they die. Chan Seong soon realizes the man is the one responsible for the blind ghost’s death. He runs towards the location of the man and he prevents the ghost from becoming a vengeful spirit. He reports the baker to the police and the woman’s death has been given justice.

The guest in room number 13

The staff sees the change in the tree, and they become scared of what it means. They talk to Man Wol and decide it is time for Hotel del Luna to get rid of Chan Seong. Seon Bi says that they can have an intern with Kim Yoo Na. She is the student who is hosting someone else’s spirit inside of her. Man Wol seems to agree but says she already tried to have Chan Seong leave and he says he will not go. Choi Seo Hee suggests they use the guest in Room 13, a spirit which can make a human crazy just by looking at it. 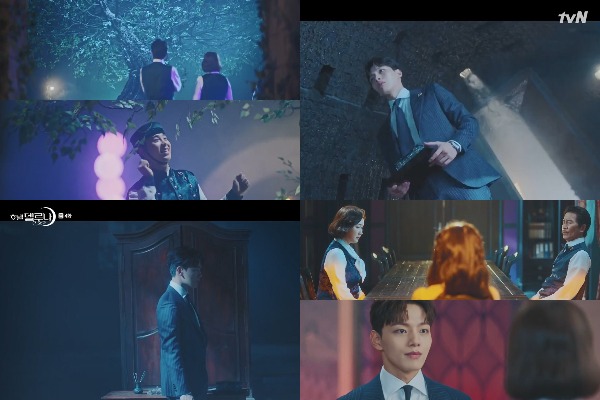 Man Wol finds Chan Seong sleeping under the old tree and she wakes him up. When he refuses to budge, she sits in front of him and stares. As she picks up a leaf off Chan Seong’s shoulder, he wakes up and thanks her for saving his life.

Man Wol denies any involvement but Chan Seong does not believe her. He continues to annoy her by saying that whenever he finds himself in trouble, he is sure she will save her.

Seo Hee asks for his assistance regarding a guest. Chan Seong agrees, and she points him to room number 13. Chan Seong enters the room and lights the incense, but he sees no one inside. Just as he is about to leave, he hears a strange sound coming from the dresser. He turns around and comes closer to it, but before he makes full eye-contact with the spirit, Man Wol calls his name. She warns him not to look and makes sure she does not hear him breathe. As the spirit goes out, Man Wol grabs Chan Seong and kisses him. 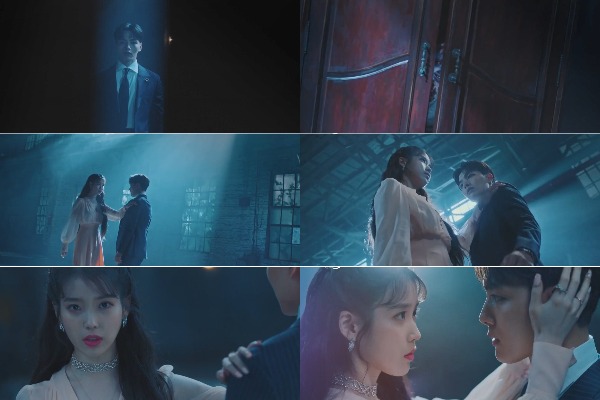 Ah things escalated pretty quick! It is fun seeing the conflicting emotions on Man Wol’s face, but one thing is certain – Chan Seong affects her. She may dislike the way he can see through her, but she is curious on how he can do it. At this stage, I think Man Wol is not having romantic feelings (at least not yet). She sees it more as a challenge. She feels there is definitely something about Chan Seong that can change everything around the hotel. And for someone who has been living a life in routine, for so long, would see any kind of challenge tempting.

Chan Seong is not afraid to speak his mind. Every time he questions Man Wol, something inside her comes alive. I would be curious too, if someone comes at me with stories that actually occurred as if they were there, so I can see why she would be interested to find things out. 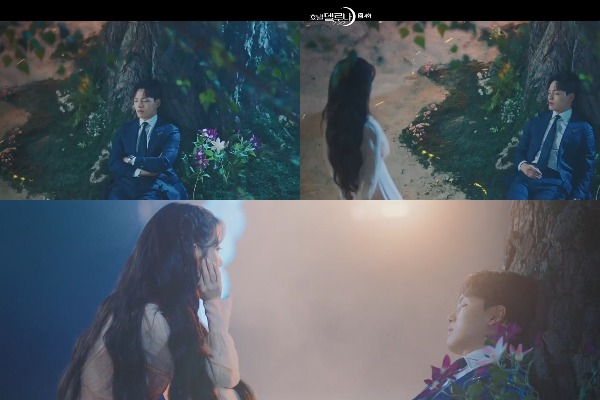 I love how the drama dropped snippets of Man Wol’s past through Chan Seong’s dreams. It made the reveal quite more interesting. Furthermore, Chan Seong’s natural inquisitiveness adds a little bit of excitement in peeling off the layers that covers Man Wol and her past life.

I also love how Hotel del Luna puts the human aspect in telling the life stories of the ghosts. The story of the dog and its owner was extremely touching. You can see and feel the animal’s loyalty to its master. If we are to talk about pure love, that story was just the perfect example.

Now I am very much eager to find out how Man Wol will defend her actions. Will she be making lame excuses, or will she surprise viewers by revealing something else? What will be Chan Seong’s reaction after the kiss and how will it affect their relationship as boss and employee? I guess we will soon find out when the next episode of Hotel del Luna airs.

Watch Hotel del Luna every Saturday and Sunday at 9:00PM KST via tvN, and also four hours after Korea broadcast on Viu.