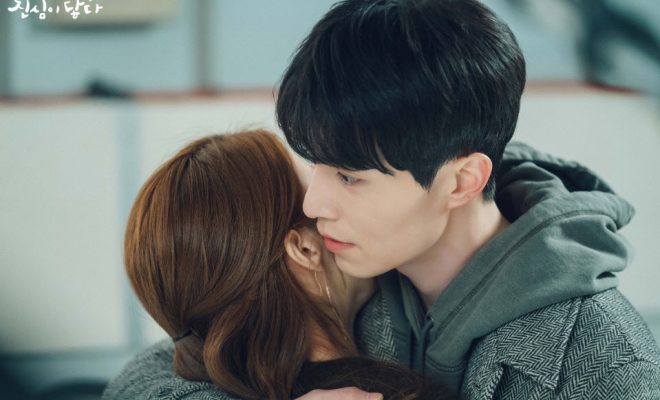 Key Moments In Episode 7 Of “Touch Your Heart”

Jung Rok and Yoon Seo finally own up to their feelings towards each other.

They are official! But before it actually happened, Yoon Seo has to experience a few setbacks. As Jung Rok has zero idea what dating is supposed to be like. It has taken a drunk and disappointed Yoon Seo to set things in motion, before Jung Rok realized he has been going at it the wrong way. And that he has to think things through. However, these two can’t seem to catch a break to properly celebrate their first day. 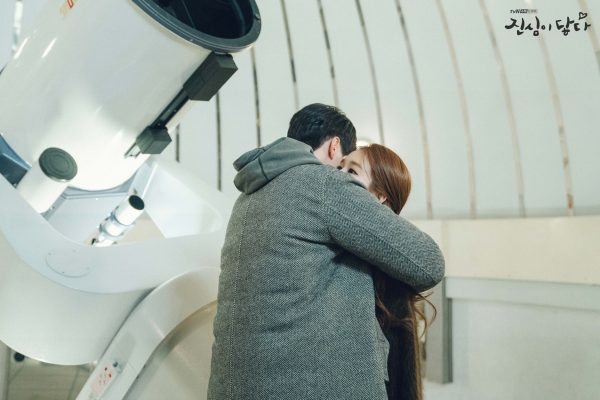 After their sweet encounter, Yoon Seo receives a text message from Jung Rok telling her to be ready for tomorrow. She gets excited and her mind jumps to the conclusion that he will officially ask her out. Yoon Seo is in such a high spirit that she greets everyone in the office a lot more cheerful than usual. Her colleagues wonder if something good has happened to her. She even gets emotional when she sees a flower basket on her desk. Only to find out it is not addressed to her and it is not from Jung Rok.

She makes another mistake as she imagines Jung Rok is asking her out, when in reality, he is doing a briefing about their new case and showing the profile of the suspect. At the end of the work day, she assumes Jung Rok is sending her a finger heart when he is just wiping something off the glass partition. She expects Jung Rok to say something, he does but not the one she yearns. He reminds her that his office has become messy and says goodbye to her. She stops him and prods, but Jung Rok never catches her meaning. Feeling dejected, she bids him goodbye and walks out with her head down.

That night, she waits for him to call her and tells herself to play hard-to-get. She drinks wine while she is waiting. But the call never comes. Drunk and frustrated, she dials Jung Rok’s number and when he answers, she scolds him for making her wait. Yoon Seo then tells him that she likes him. She confesses that she was happy when he told her that night that she is special to him, but now she is mad at him because he has never said anything to her all day. She yells at him for being mean and then she hangs up.

After talking to Se Won, Jung Rok sends a text to Yoon Seo asking her to meet him, so they could talk. Yoon Seo reads the message as she wakes up and realizes she made another drunken mistake. When Hyuk Joon arrives, she asks him for a white envelope as she will be writing her resignation letter. She tells him she can’t go to work anymore but she is not telling him the reason. The employees at the law firm are told that she is taking the day off due to personal reasons. Jung Rok denies something is wrong between the two of them, and inside his office, he tries to call Yoon Seo, but there is no answer. 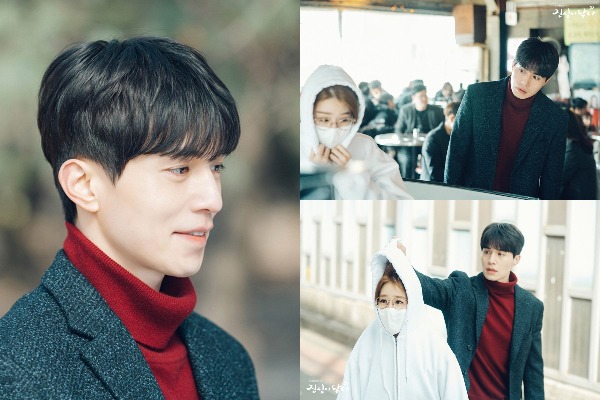 He remembers Se Won’s advice and searches for ways online to see the things Yoon Seo likes. He stumbles upon a video clip where Yoon Seo is being interviewed inside a regular chicken feet restaurant and she talks about her ideal man. Jung Rok goes out of the office and buys a pink stationery, and struggles to compose a handwritten message for Yoon Seo.

Meanwhile, Yoon Seo heads to the chicken feet restaurant and orders her usual meal. At the same time, Jung Rok arrives and surprises Yoon Seo. She runs away from him, but Jung Rok chases after her. He eventually catches up with her and they have their talk. Jung Rok asks her the reason why she ran away and did not come to work. Yoon Seo explains that she feels embarrassed. Jung Rok says that he is the one who did a poor job of taking their relationship to the next level. He then hands her the letter that he wrote officially asking Yoon Seo out, which she gladly accepts.

A COUPLE OF DISAPPOINTING FIRST DAYS

Jung Rok tells her to take the rest of the day off when she suggests going back to the office with him. He says he will see her at night and they will have their first date as a couple. Yoon Seo agrees, and they plan to meet. However, Jung Rok has to cancel because he needs to bring Yeo Reum to the hospital after she collapsed in front of him. He mentions that he already called a friend to watch over Yeo Reum, but he still has to meet a client.

Yoon Seo, although disappointed, tells him not worry and decides not wanting the day to be their first day. She tells him that they will count tomorrow instead to which Jung Rok says yes.

The next morning, both are sitting in Joon Kyu’s office and he tells them that Yoon Seo has to help Attorney Choi as he is inundated with divorce cases. Yoon Seo tries not to accept the task, but Jung Rok approves of it, much to her dismay. Little do they know that Joon Kyu and Joon Seok have planned to split them up thinking that Jung Rok is making Yoon Seo’s work life miserable. 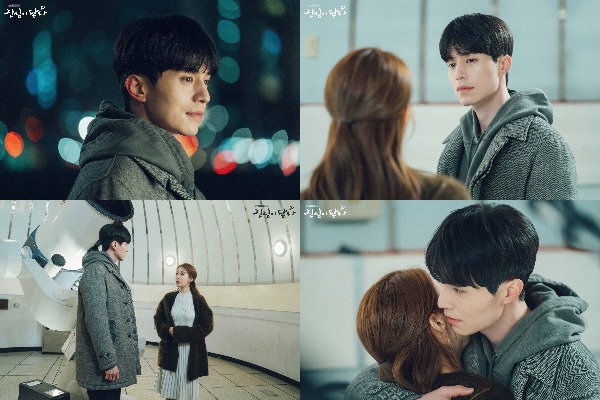 While checking on Lawyer Choi’s schedule, she sees a familiar name. The attorney confirms that it is the actress she knows. Upon learning that she is coming for a consultation, Yoon Seo decides to leave to avoid bumping into her. However, her rival actress comes at the same time and Yoon Seo panics. She runs into Jung Rok’s office. He suggests she hides in his office and he will close the blinds, but she opts to go out instead. Unfortunately, she still faces her archenemy and a few subtle insults are thrown at Yoon Seo’s way.

Yoon Seo’s encounter with her fellow actress clearly upsets her. She complains to Jung Rok on their way to her house. She recalls the drama incident which the actress offered to accept a lower pay, so she could get the main role in the drama. Yoon Seo asks Jung Rok if it is too late to file a lawsuit against her to which Jung Rok confirms. He also tells her that the actress did not do anything wrong, as she only offered a better alternative and that she did not make any false claims nor have her fired from the job.

Jung Rok’s reply upsets her once more as she is talking to him as his boyfriend, not as her lawyer. She even tells him that she will take his side regardless of who is at fault. Before alighting the car, she tells Jung Rok, again, not to count the day as their first day. At his house, Jung Rok ponders and recalls the events that happened, and goes back to Yoon Seo’s house.

He states that they should no longer postpone their first day and they should go out on a date that night. Trying not to seem too eager, Yoon Seo coyly accepts Jung Rok’s invitation, much to his delight.

Jung Rok takes her to an observatory and Yoon Seo exclaims in happiness. He informs Jung Rok that she has never been to one before. Jung Rok tells her that he thought of the observatory as it is too late to go anywhere else. Also, they can’t have their first date in a pork backbone stew restaurant. He considers the location, which has to be special but not crowded and nice enough to have their first date.

Jung Rok apologizes for being slow, not just that day but also for not asking her out sooner. He also says sorry for his inattentiveness, his cancellation of their dates and for upsetting her in more ways.

He acknowledges that he is very uncomfortable in expressing his emotions. Even though he may not be able to match Yoon Seo’s pace, he will move towards her on his own. It may be slow, but he guarantees it will last for long time.

Jung Rok moves Yoon Seo with romantic speech and nods her agreement. She then asks if Jung Rok likes her. When he hesitates, she says to forget hearing anything and turns away. Jung Rok embraces her and says he likes her a lot.

Well this episode is just so sweet. We finally have Jung Rok admit to his feelings and we see him go through a series of realizations. I get frustrated with Jung Rok’s character, who is so literal and logical. But I also love that when he thinks things through and realizes something must be done, he goes all out to do it. He also knows himself and the things he lacks that he does not hesitate to listen and to follow an advice. 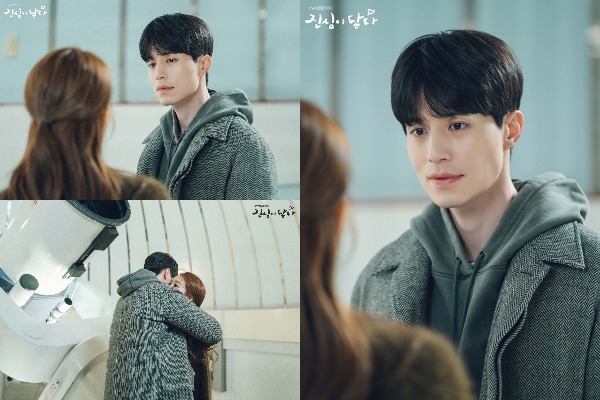 It is fun to see Jung Rok get exasperated. I laughed when he can’t write a letter to Yoon Seo that did not read like an official or legal document. It is also nice to witness Jung Rok loosen up a little. His smiles are getting bigger and brighter and we have Yoon Seo to thank for that. He is starting to open up and to see that relationships do not need to be taken logically. Him telling Yoon Seo how awkward he is in expressing his feelings is a huge step for someone like Jung Rok. He may be changing but he still keeps certain aspects of his personality. He struggled to write something for Yoon Seo, but the one he ended up with is still so him – short and direct to the point.

Touch Your Heart continues to entertain with its characters and story. It is quite refreshing to watch a drama that does not have meddling mothers. We have two interfering cousins instead, who are not annoying in any way. We are nearing the halfway mark of this light and fun series. It seems that the conflict is reserved on the latter half, so let us all enjoy the lighthearted moments before we are hit with the heavy ones.