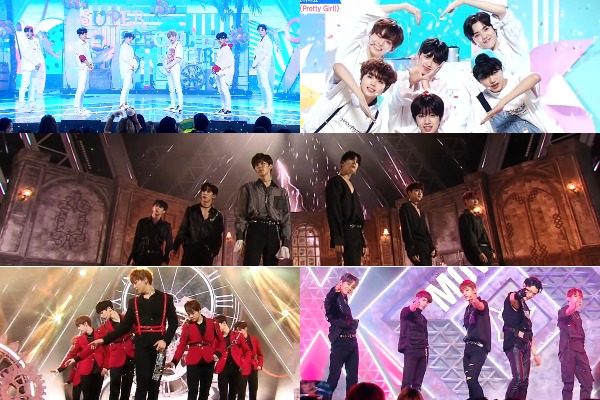 The battle to be part of the debut group is getting more intense as trainees prepared and performed for the Concept Evaluation.

Produce X 101 episode 9 saw some trainees move from one team to another as the result of the last elimination. Team Monday to Sunday lost all members, except one. The other teams must vote for the trainees they wanted to remain. The members who ranked at the bottom will have to transfer to a different team and learn another song. The episode also revealed the trainee, who survived the X Consolation Evaluation as voted by the National Producers. 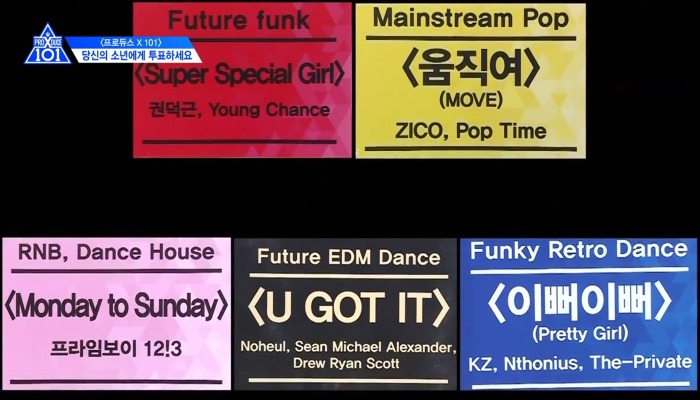 Meanwhile, episode 10 showed the trainees hard work as they performed in front of a larger onsite voters as well as the Concept Evaluation song producers and choreographers. The latest episode also revealed the winning team and the top trainees who would get the much-coveted benefit points.

At the start of the show, Lee Dong Wook announced the benefit points for this season’s Concept Evaluation. The benefit points, just like in the previous evaluations, greatly affected the 30 remaining trainees’ survival in the show. The National Producer Representative revealed that the top trainees of each team would receive 500 times their votes, while the first-placed team got 200,000 benefit points. However, the votes were to be divided among the members of the winning Concept Evaluation team. The top trainee would get 100,000 votes while the rest had 20,000 points each.

Since the Second Ranking Announcement eliminated half of the trainees, it is inevitable that the teams with the most remaining members had to boot someone out. Only six trainees must comprise each song. Team “Pretty Girl” had to let go of four members, while Team “U Got It” must send three members to the other teams. On the other hand, Team “Move” would have one of its members reassigned. Teams “Super Special Girl” must acquire three additional members and “Team Monday to Sunday”, with only Tony left from the original group, needed five members. 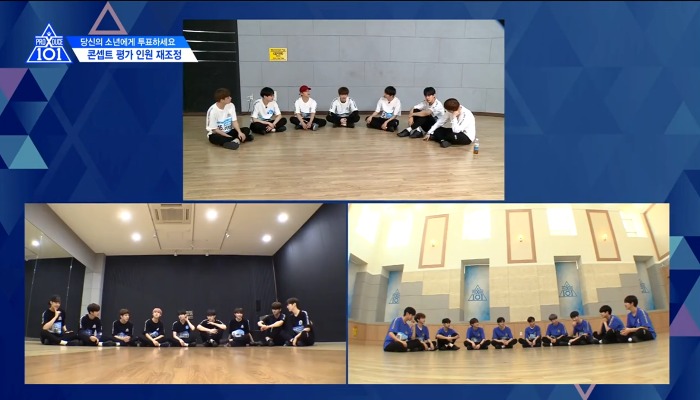 The teams that needed to give up on its members had to vote for the trainee that best fitted each position. The trainees who received the least number of votes had to leave and go to another team. Trainee Kang Hyeon Su of “Super Special Girl” had the priority of choosing first the addition to his team, as he had the highest rank among members. The trainees who would not be picked by Kang Hyeon Su’s team automatically became members of Team “Monday to Sunday”. 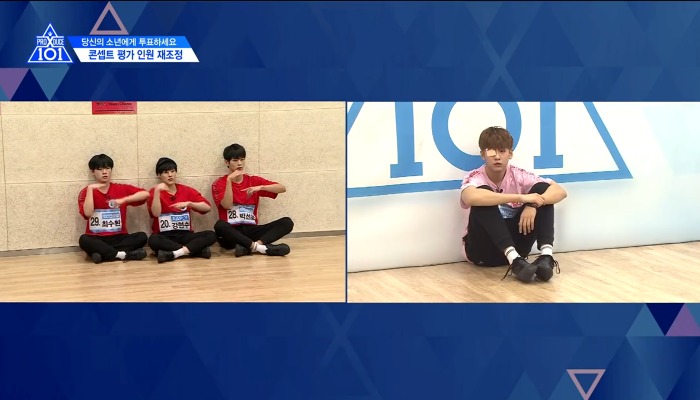 The three groups, which had to kick out some of their members, voted on the trainees that they thought best fit each position in their team. After each member cast their votes, trainees Kim Si Hoon, Song Yu Vin, Nam Do Hyun, Keum Dong Hyun, Lee Se Jin, Lee Hyeop, Joo Chang Uk and Kim Min Kyu received the lowest number of votes. Team “Super Special Girl” picked Song Yu Vin, Kim Si Hoon and Keum Dong Hyun to be part of their team, while the remaining five trainees went to Team “Monday to Sunday”.

Winner of the X Consolation Evaluation

Lee Dong Wook called the four trainees who had a chance to come back as determined by the National Producers. Out of the four candidates, Woollim Entertainment trainee Kim Dong Yun won and had the chance to continue his Produce X 101 journey. The 30 survivors welcomed him warmly, most especially the other Woollim trainees. 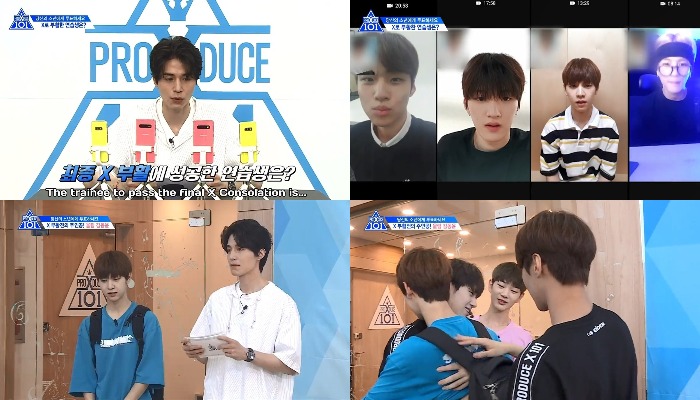 After the reveal, Lee Dong Wook said that teams would be given time to discuss whether they wanted Dong Yun to join their team. If no one picked him after the allotted time expires, he would pick a group randomly. Just before the time expired, Lee Se Jin went to the practice room where Lee Dong Wook awaited and confirmed that his team wanted Kim Dong Yun. Since no other team approached, Kim Dong Yun joined Team “Monday to Sunday”.

Trainees Song Yu Vin, Keum Dong Hyun and Kim Si Hoon, joined original members Park Sun Ho, Choi Su Hwan and Kang Heon Su in performing this Future Funk track. The members were proud about their teamwork and chemistry. The trainers saw and praised their team for being precise and accurate. They mentioned that even the gaps between each members on stage were equal. Team “Super Special Girl” gave out a great performance but placed fifth during the team ranking announcement. Trainee Keum Dong Hyun was voted top trainee hence, getting the benefit points.

Trainers commended all members as they all fitted the song’s concept very well. The funky retro dance music was performed by trainees Ham Won Jin, Song Hyung Jun, Son Dong Pyo, Koo Jung Mo, Kang Min Hee and Lee Jin Woo. Ham Won Jin had to give up his parts to Kang Min Hee due to a medical condition. The group captured the hearts of the audience as well their fellow trainees with their cuteness and refreshing take on the song. The group placed third among the teams and Song Hyeong Jun got the top spot earning him the benefit points.

This team faced quite a challenge as most members were not part of the original group. Kim Min Kyu, Nam Do Hyun, Lee See Jin, Lee Hyeop and Joo Chang Uk joined Tony, who was the only member left from the original group. With the addition of Kim Dong Yun, the parts which were already established had been re-worked. Despite the challenges, Team “Monday to Sunday” provided a great stage but ranked fourth in the team rankings. MBK Entertainment Trainee Nam Do Hyon once again placed first in his team.

Comprised of high-ranking trainees, Kim Woo Seok, Kim Yo Han, Han Seung Woo, Lee Eun Sang, Cha Jun Ho and Hwang Yun Seong, this group was the team to beat. However, the song’s producers addressed some concerns with regards to the vocal parts. During rehearsal, Trainees Kim Yo Han and Han Seung Woo received a lot of good words from the trainers. After the performance, the team ranked first and Kim Yo Han got the additional 100,000 benefit points. Apart from that, he also got 500 times his onsite votes for being the number one trainee.

Members Cho Seung Youn, Lee Jin Hyuk, Kim Kook Heon, Lee Han Gyul, Choi Byung Chan and Kim Hyun Bin faced with a lot of challenges. Three members suffered from injuries, and adjustments were made to ensure the trainees get the appropriate rest. During the dance rehearsal with Trainer Choi Young Jun, Lee Han Gyul had to skip as he went to the doctor due to a cold. Despite the challenges, Team “Move” tore the stage with their fiery performance. The onsite National Producers voted Cho Seung Youn as the top trainee while his team placed second.

After the performances, the team gathered to check the results of the online votes. Lee Dong Wook also announced the top trainees and the winning team that got the 200,000 benefit points.

The preview for the next episode of Produce X 101 shows trainees having fun during makeup class and field day. But after the fun and games, the dreaded Third Ranking Announcement will also happen.