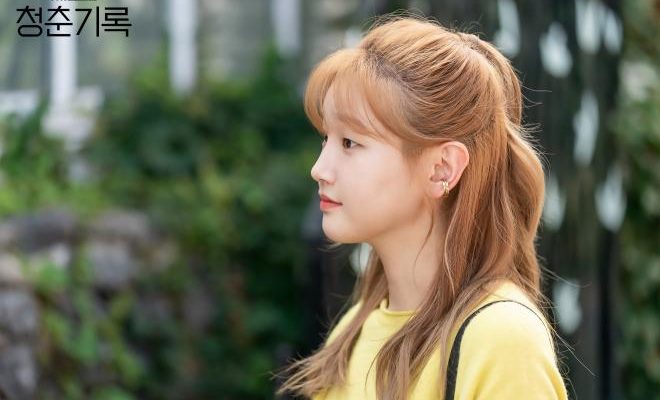 Hae Hyo’s bitterness to his friend’s success starts surfacing. But for now, he’s just plainly despondent by the situation.

Finding name in the entertainment industry is not an easy task. It requires pure hard work and commitment that even for the most affluent amateur actors struggle in. One perfect example is Hae Hyo. Though his rich mother completely backs him up, Hae Hyo is now being left behind and outperformed by his unprivileged-now-famous friend Hye Jun.

Catching up to the continuation of the father-daughter bonding, the two gather at breakfast. Before they start eating, she receives a morning call from Hye Jun. Curious of the person behind the line, Dad said that he won’t be asking anything until she initiates telling.

Then, he turns into serious mode and explains that he came to discuss something important. Suddenly, he hands her an envelope of cash he saved up for her wedding. Showing that he’s someone who works hard and cherishes life, Dad confesses that he starts painting again, and that she’s the reason behind it. 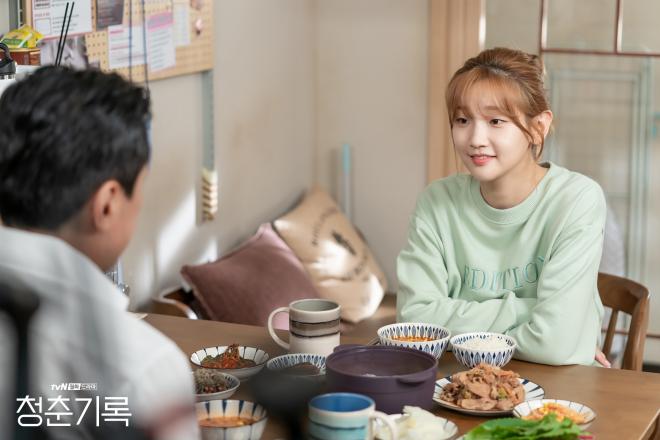 It seems like Hae Hyo’s manipulative parents are on it again. Dissatisfied with their son’s performance, Dad orders an interim check on him. Bringing a meticulously-prepared performance report, he sits down with Hae Hyo to lecture him.

He begins calling his son a puppet and pawn of Do Ha, and asks if he wants to be a star or an actor. Hae Hyo admits he wants to be an actor. However with his current performance, Dad deduces that he should just enlist in the military.

As if the verbal slam isn’t enough, Yi Young exclaims that the series was a poor choice. Comparing his son’s static career to Hye Jun’s thriving one, Yi Young tells him to be more aggressive like Hye Jun. Hae Hyo pleads for her support because he’s been giving his best, and promises that he will get the lead role next time.

Now that his military service is coming up, like Hye Jun, he decides to postpone it to set things right for his career and give his last best shot. 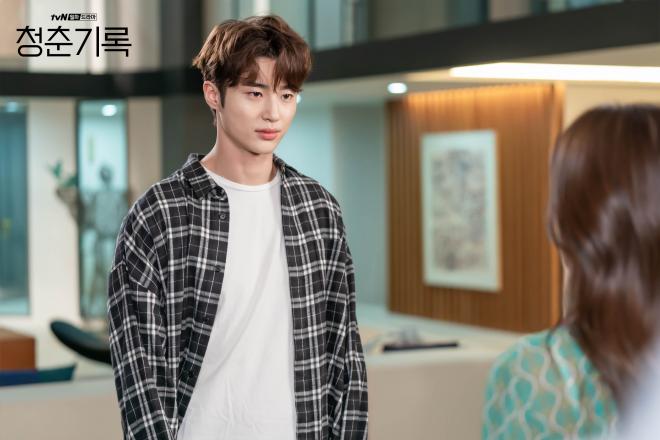 Continuing the deal where they left off, Jeong Ha and Jin Joo has finally come into a confrontation. Before handing her resignation letter to the salon director, she asks her if she can set things right with Jin Joo.

Over a meal, Jeong Ha shows a piece of evidence, which makes Jin Joo yield in the three options she presents: one she will send the video to everyone, gather everyone and plays it in front of them, and lastly, she apologizes and will delete the clip. As expected, Jin Joo give in and writes down a sort of contract as she owes her an apology.

From this scene, we can notice, Charlie Jung’s name has surfaced, and yes, under an infamous notion. One of Gyeong Jun’s co-worker asks him if he heard of the name Charlie Jung.

Then, that colleague shows him some of the comments claiming that Hye Jun is gay, and if he goes clubbing. Through this, we are now getting hint about Charlie Jung’s reappearance in near future episodes. We may never know!

As usual, Jeong Ha clocks in as Hae Hyo’s makeup artist. She notices that his client is in a bad mood and tries to brighten his mood. But to her surprise, he gets annoyed at her joke, but tells her not to panic.

At their scheduled interview, Reporter Kim asks to name his bestfriend in the industry. Then, he immediately mentions Hye Jun and clarifies that they’re elementary friends. After asking questions, which seems directing to Hye Jun, they wrapped up the session.

While Jeong Ha can’t wait to get home, Hae Hyo starts feeling dispirited and asks her out, but she refuses. Then, he guesses if Hye Jun is waiting at her home, and admits it. Though he wants to join, Jeong Ha turns him down.

Hurrying home, Jeong Ha gets welcomed by the warm home meal prepared by Hye Jun. As they sit down, she opens up her decision of establishing her own salon and accepting her dad’s help.

Hye Jun approves her decision, and Jeong Ha thanks him for giving such encouragement with her choice. After a fulfilling dinner, they cuddle on the couch and turn on Hye Jun’s movie. While she sits in awe of his acting, Hye Jun starts getting more embarrassed. To their surprise, Mom starts calling Hye Jun. 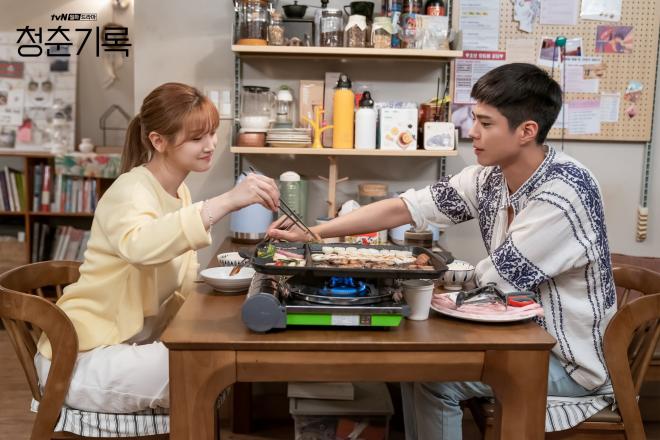 After the guests and spectators leave the hall, the three friends pose for a group picture with Min Soo (visual overload!). Being a huge fan of Min Soo, Min Jae whispers she wants to join the picture too. But Hye Jun reminds her to take the photo (so adorable!). 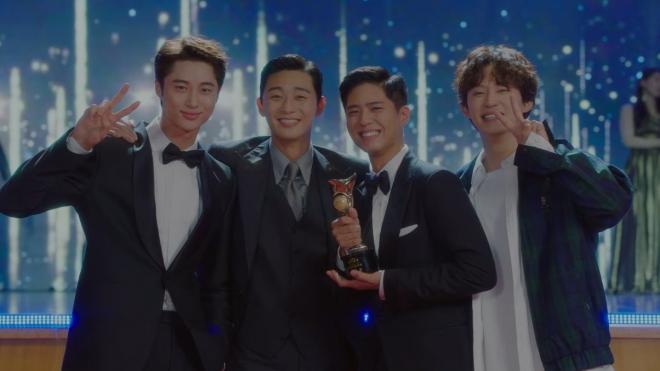 As the awards night comes to an end, Jeong Ha runs into Hae Hyo. While Hye Jun is searching for Jeong Ha, he scans through his cellphone and finds several missed calls, from Jeong Ha, Jia, and Charlie Jung.

He tries calling Jeong Ah, but she missed it because she’s with Hae Hyo while they cheerfully sing inside his car. As they sing on the top of their lungs, Hae Hyo appears with a smile on his face, but his sad eyes tell otherwise. Then, he shares about his nomination with the Rookie Award, which he didn’t even win.

To divert the gloomy atmosphere, Jeong Ha tells Hae Hyo that she’s hungry. As they enter the restaurant, he starts stuffing down the food continuously. Due to that, he soon throws up the food and gets Jeong Ha worried. He admits that it usually happens whenever he’s stressed.

Switching to a scenic area to release stress, Hae Hyo confesses he wanted to win the rookie award since you can also receive it once in your life. Without saying any word, Jeong Ha listens as he admits hating the people comparing him to Hye Jun.

While heading to the office, Hye Jun receives a call from an unknown number. It turns out its the police. He answers and the person next to the phone line says if he can come for an investigation about Designer Charlie Jung’s death. The mood begins getting heavier and tense. Soon, the words start to sink in his mind. In extreme disbelief, Hye Jun stares blankly in the air and is unsure of what he just heard.

As the jealousy of different people surrounding Hye Jun starts emerging, the drama is getting interesting. The characters are realizing that Hye Jun is a real gem, most especially, his father, who continuously doubted the potential of his own son.

Things are also slightly getting lighter and more desirable with how Gyeong Jun, though minimal, defends his brother against online haters, which is quite a character development.

With its continual sluggish pacing, I think its mainly because of the bigger picture the drama is yet to demonstrate. And I’m pretty sure it will be much worth the wait. Throughout, it has an overall warm tone that heartens and makes me feel nostalgic.

Now that it reaches its second half, I concluded that this show should be really enjoyed slowly, and is not recommended for binge watching. That’s one of its beauty that I choose to appreciate.

In this episode, there are also lots of cute and satisfying scenes to enjoy. One is Jeong Ha making peace with Jin Joo before starting anew in her own salon.

One thing that is notable in Record of Youth are the spotlights on daily scenarios and little things in life that gives us joy. Several examples are the scenes when Hye Jun cooks for his girlfriend, and cuddling while watching their favorite shows. Another scene that delighted me, is when Min Jae asks for Park Seo Jun’s autograph. She was there representing all fan girls fawning over a fan-favorite actor! *giggles

Even with various emotions we can feel in this chapter, there are still a lot to expect with how these young people slowly reach for their dreams, and I will be waiting until that time comes!