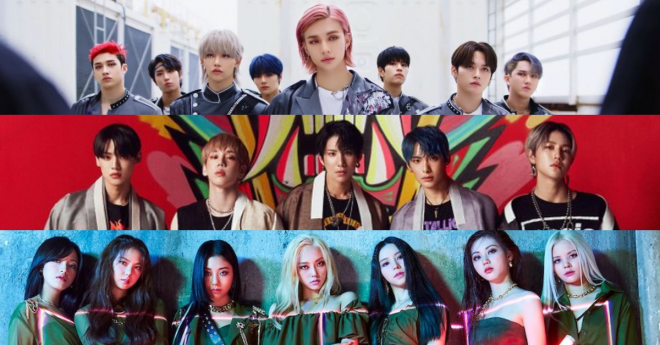 This month is shaping to be a busy start to the fall season with numerous comebacks slated for a September release!

The last month in K-pop’s third quarter will be a hectic one as many beloved groups make their highly anticipated returns! The K-pop industry continues thrilling fans with many comebacks to kick off the start of autumn in September.

After more than a year since their last release, Lovelyz will make their long-awaited return to the music scene this month. Though the girl group has been focused more on individual activities since then, Lovelinus can look forward to their reunion in the group’s comeback with their seventh mini-album Unforgettable: Pieces Of Memories. Its highlight medley promises a diverse range of songs, exciting fans even further.

Their seventh mini-album releases on September 1.

To the thrill of Cheshires, CLC is set to come back with their single album HELICOPTER. Evoking a more femme fatale concept for their newest release, the group intrigues with their initial concept photos. Additionally, the brief audio snippet teasing a more EDM sound for the song increases anticipation for their upcoming release.

A.C.E prepares a traditional, historical comeback for their mini-album HJZM: The Butterfly Phantasy. The group thrilled fans with various concept images and a visual highlight melody. From edgier looks with red contacts to traditional Korean outfits like hanboks, the members tease a fantastical journey ahead.

Soloist Jamie announced new music coming this month, to the delight of fans. The artist will make her comeback with the digital single, “Numbers”. This marks her first release since joining the company Warner Music Korea following her departure at JYP Entertainment, and her first release under the name Jamie instead of Park Jimin. Jamie raises expectations for her new project and how her sound may have changed since her last release.

“Numbers” will release on September 3.

Super Junior’s D&E make their return with BAD BLOOD as it drops on September 3.

GOT7’s Jackson Wang makes his return with the single “PRETTY PLEASE”. The track is a collab with the Swedish DJ duo, Galantis. As the teaser photo shows Jackson staring at his clenched fist, many fans are intrigued by what appears to be a very emotive upcoming release by the artist.

The collaboration drops on September 4.

K-pop legend Taemin makes his solo comeback with his third full album, [Never Gonna Dance Again: Act 1]. This marks his return to solo activities following his last release in February 2019. Since then, the artist has been busy with his promotions in the popular SM group, SuperM. Fans are eager to see what the singer has in store for his newest individual project.

Taemin will make his highly anticipated comeback on September 7.

SEVENTEEN returns this month with their second Japanese mini-album, titled, 24H. The group pre-released their title track for their newest project at the end of August. The hypnotic music video features scenes of the group’s impressive signature choreography strengths. Additionally, the video’s sleek minimalistic design captivated fans and raised excitement for the Japanese album.

24H is slated for a September 9 release.

Only a few months since their last release with Go Live in June, Stray Kids are back this month with their first repackaged album since their debut. In the cinematic trailer for the upcoming release, the members are seen in a fierce showdown with various bodyguards. Following the success of their last title track “God’s Menu”, fans eagerly anticipate the next musical journey the group has planned.

IN生 will drop on September 14.

VAV are gearing up for their sixth mini-album release following their last comeback in October 2019. Their newest project is intriguingly titled, MADE FOR TWO, sparking suspicions of a love-focused album. In a teaser snippet for the title track, the group dreamily sings, “love, love, love, with you,” against a synth beat, exciting fans for their upcoming release.

MADE FOR TWO releases September 15.

Leading girl-group TWICE will make their return with their third Japanese album titled, TWICE 3. The album will consist of Japanese versions of six popular tracks, including songs such as “FANCY”, “Feel Special” and “MORE & MORE”. The group’s concept photos feature the members in refreshing all-white outfits with beautiful floral arrangements.

On September 7, EVERGLOW delivered the exciting comeback announcement to their fans. The girls will be returning with a new album, titled -77.82X-78.29, on September 21 after seven months.

The group also released a video through their official accounts and officially announced their upcoming return. In the teaser video, the album release date and title were revealed along with the group’s new comeback logo.

Pentagon thrills fans with their first-ever full Japanese album. UNIVERSE: THE HISTORY contains twelve tracks, filled with Japanese versions of fan-favorites as well as beloved Japanese singles that the group has previously released. The album concept photos feature the members’ chic looks in contrast with a more whimsical rainbow sheen.

TOP Media boy group UP10TION revealed the date of their the release of their ninth mini-album. Light Up.

The group broke their first hiatus in about a year and announced that they are gearing for a new comeback through Get Ready for UP10TION in August last year. They revealed the album preparation process, including behind-the-scene recordings and choreography practice.

This marks as their first comeback this year 2020, since their eight mini-album The Moment of Illusion with its title track “Your Gravity”

Following the delivery of their newest singles “100” followed by “Tiger Inside” releasing September 1, SuperM make their highly anticipated comeback with their first album called Super One. The group, comprised of a mix of SM superstars, has garnered incredible support from fans following their debut in 2019.

Expectations are high for their first full album which drops on September 25.

September 15 — VAV returns with mini-album MADE FOR TWO.